* '2023,' Qamar captioned the post on the photo and video sharing along with a white heart and a dove emoji 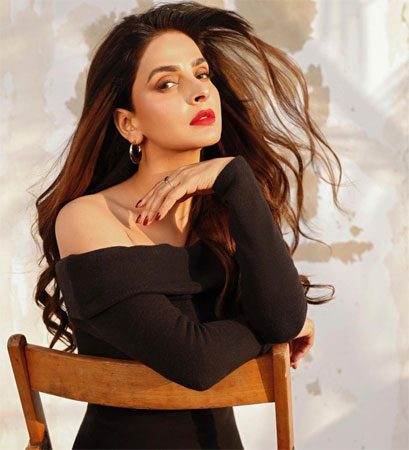 Yet another intriguing video of A-list actor Saba Qamar surrounded by white flowers is going viral on social media. The ‘Fraud’ actor has left her fans guessing once again, as she posted a new video on her Instagram feed, on Tuesday. “2023,” Qamar captioned the post on the photo and video sharing along with a white heart and a dove emoji. The clip sees the celebrity surrounded by several flower buckets filled with white daisies. “Happy New Year Sabboo,” was written on the buckets.

For the unversed, the actor has previously shared multiple videos of the room filled with flowers which she received from her special someone. She revealed in one of the chat show outings that the flowers are sent by someone special who is her admirer. “He is not from Pakistan, so, Pakistanis don’t have to compete with it,” Qamar added.

“All I can say is, the way matters are moving ahead, it will happen soon,” she replied when questioned about revealing the lucky guy. Meanwhile, on the work front, Saba Qamar was last seen as protagonist Maya in ARY Digital’s serial ‘Fraud’ alongside actors Ahsan Khan and Mikaal Zulfiqar. The hit serial written by Zanjabeel Asim Shah, and directed by Saqib Khan, aired its final episode 35 on December 31, with a powerful message. Moreover, she is now gearing up for a mega project opposite Muneeb Butt, made under the banner of Abdullah Seja’s iDream Entertainment, coming soon only on ARY Digital.