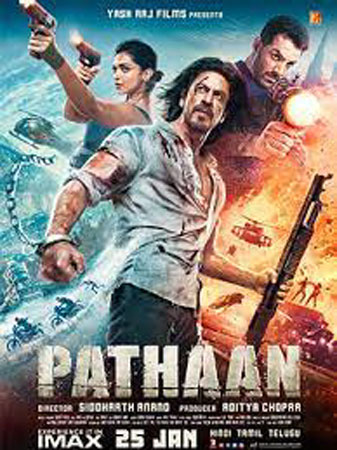 ‘Pathaan’ is one of the most anticipated Bollywood movies this year and will feature A-listers Shah Rukh Khan, Deepika Padukone and John Abraham in lead roles. Moreover, the fans can’t wait to see the ‘Chak de India’ star share the screen with Salman Khan.

Shah Rukh Khan and Salman Khan have shared in hit projects ‘Kuch Kuch Hota Hai’, ‘Hum Tumhare Hain Sanam’, ‘Karan Arjun’ and others. They will add flair to the big screen this time too.

The ‘Dilwale Dulhaniya Le Jaayenge’ star gave an interesting reply to a fan who asked when the ‘Bajrangi Bhaijaan’ star would make his entry in the film. Shah Rukh Khan used this as an opportunity to film. He called it an interactive and can come to the cinema and watch him by using a QR code.

The film’s trailer will release on January 10.

‘Pathaan’ came under controversy following the release of the video of its song ‘Besharam Rang’.

In the video, Deepika Padukone was wearing a saffron-coloured bikini.

The social and religious groups claimed that the costume had hurt religious sentiments.

Then, everything dissolved into chaos as the religious leaders, politicians and lawyers called for the film to be banned.

The situation had intensified to such an extent that a Hindu extremist leader had threatened to burn Shah Rukh Khan alive after skinning him.