Hilary Swank showcases baby bump in photo with her Furbabies 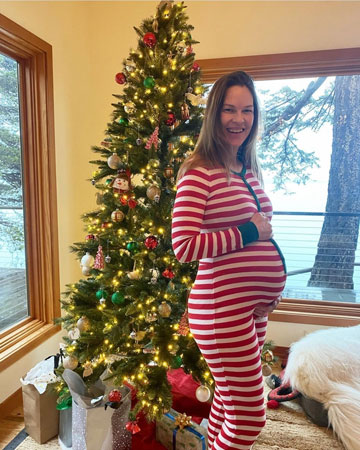 Bumpin’ around the Christmas tree. As Hilary Swank awaits the arrival of her twins with husband Philip Schneider, the actress did some holiday decorating with her other babies, the furry kind.

Taking to Instagram on Dec. 17, Hilary shared a festive photo of herself putting the finishing touches on her Christmas tree in her Colorado home as two of her four beloved rescue dogs lay beside her.

In the pic, the 49-year-old wears cozy brown shearling slippers and an all-black ensemble that puts her growing baby bump on full display. She appears to be make-up free and wears her brown hair down and straight. Hilary captioned the seasonal snap, “All I want for Christmas is yoooouuus, ohhhhhhh baby(s).”

The heartwarming holiday moment comes two months after the Oscar winner first announced her pregnancy during an appearance on Good Morning America. “This is something I’ve been wanting for a long time-I’m gonna be a mom,” she shared during the Oct. 5 episode of the morning show. “And not just of one, but of two. I can’t believe it.” Although Hilary has not shared the babies’ sexes, she did tease her twins’ due date two days later during a visit to The Drew Barrymore Show m, noting that their expected arrival falls on the birthday of her late father.

The twins will mark the first children for Hillary and Phillip, who tied the knot in August 2018. In addition, the Alaska Daily star has been a dog mom for years. In 2015, she established the Hilaroo Foundation – a portmanteau of her name and the name of a dog she adopted, Karoo-that matches abandoned dogs with children.

“Every dog I’ve ever rescued and also shared my life with have all had their unique way of being in the world,” Hilary told People in 2021. “My dogs, my horses, my birds who are rescues, help me through every day in life. It would be so lonely without them and their spirit and their energy.”