Dasu project’s diversion system to be completed in May 2023 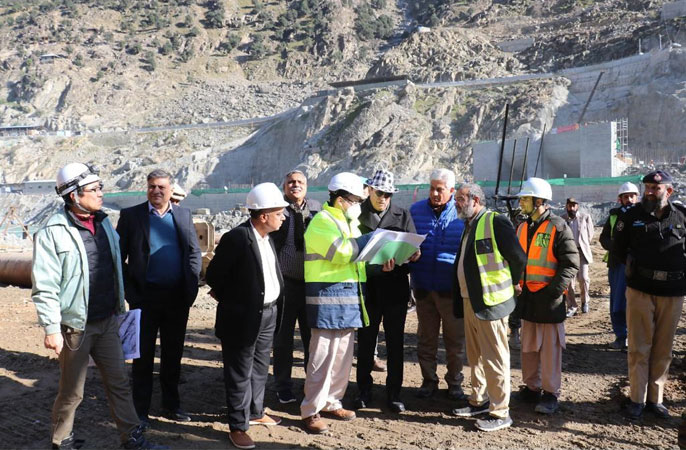 Construction work is continuing simultaneously on 12 different sites of Dasu Hydropower Project. The critical diversion system will be completed in May this year , while electricity generation from the project will commence by end 2026. This was briefed to Chairman WAPDA Lt Gen Sajjad Ghani (Retd) by the project management during his visit to Dasu Hydropower Project, which is being constructed by WAPDA on River Indus upstream of Dasu town in Upper Kohistan district of Khyber Pakhtunkhwa province. The Chairman visited various sites of the project including diversion tunnels, stater dam area and the project colony. He was accompanied by the Commissioner Hazara Division. GM and PD Dasu Hydropower Project, representatives of the Consultants and the Contractors were also present on the occasion.

During his visit to the project colony, the Chairman inaugurated the newly constructed office building of the project. He also had a meeting with grand jirga, comprising elders and notables of Kohistan region. Interacting with the jirga members, the Chairman said that the agreement, signed among the United Kohistan Jirga, civil administration and WAPDA last month, will prove beneficial for both locals of the area and the project.

It is worth mentioning that the 4320 MW-Dasu Hydropower Project is planned to be completed in two stages. At present, WAPDA is constructing stage-I with installed generation capacity of 2160 MW and annual energy generation of 12 billion units of low-cost and environment-friendly electricity. The stage-II, when implemented, will also provide 9 billion units to the National Grid. On completion of the both Stages, Dasu will become the project with highest annual energy generation in Pakistan i.e., 21 billion units on the average. WAPDA is spending Rs. 17.34 billion on the schemes relating to resettlement, environmental management and social development in the project area. About 3722 jobs, including 1945 for locals, have so far been created, which will increase to 8000 mark during peak construction period of the project.