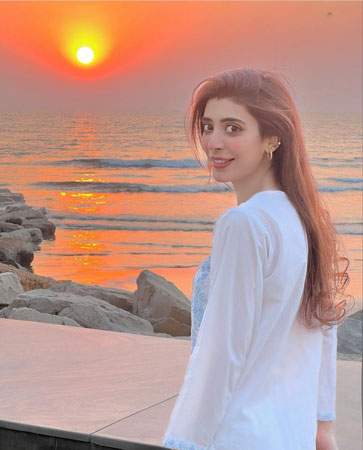 Urwa Hocane shared the viral pictures on her account. The three-picture gallery showed her posing for the images at sunset. In the caption, she wrote that she was heading into 2023 with a heart full of love. She prayed that the year brings us all more health, healing and peace.

The picture got heartfelt comments about her dashing looks and acting skills.

It is pertinent to mention that Urwa Hocane has millions of social media followers. She takes to interactive platforms to share pictures and videos of her personal and professional happenings with fans.

Earlier, she mesmerized netizens with pictures of her in pink and red eastern wear. Her post was liked by thousands. Urwa Hocane is one of the most promising actors to have graced the screens. She has a knack to play diverse characters in dramas, sitcoms and films without breaking a sweat.

Moreover, she has pulled off amazing performances in films ‘Punjab Nahi Jaungi’ and ‘Tich Button.’

For those unversed, Urwa Hocane tied the knot to Pakistani heartthrob Farhan Saeed in 2016, however, there have been speculations around the couple’s separation for quite some time now.

Though, no official comments from any of the sides have been made as yet.