‘The Losing Side’ bags awards at Cannes World Film Festival 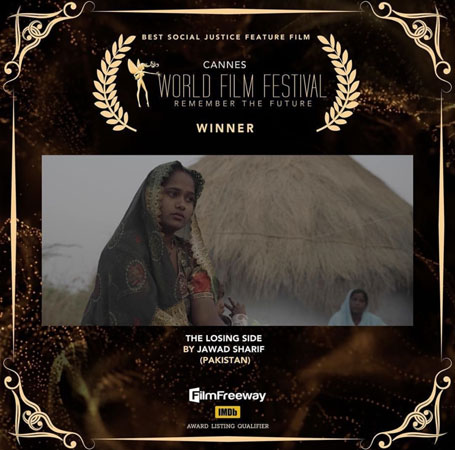 The Losing Side, a movie that highlights the issue of forced religious conversion in Sindh, has received two awards at the Cannes World Film Festival. The movie bagged awards in the category of Best Social Justice Feature Film and Best Human Rights Film for the month of November 2022. The director of the film, Jawad Sharif, also shared the achievement on his social media. Taking to Instagram, the director wrote, “Such good news on the last day of 2022. Our film The Losing Side has won the Best Human Rights Film Award at @cannesworldfilmfestival. Thank you, everyone, for being part of this journey.” The Losing Side documents the accounts of Vahitoo, Simran, Keeran and Reena, four women who have been victims of forced religious conversion and forced marriage. Alongside, numerous activists, politicians, and legal experts involved in these stories contribute to the discussion of why such a barbaric practice persists over time. The documentary sheds light on all the legal, social, and religious aspects of this.