Central Punjab down Balochistan in final to lift Pakistan Cup 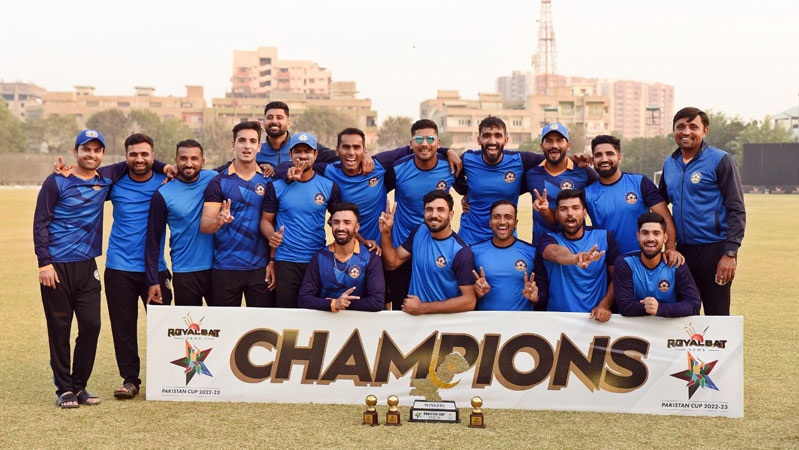 KARACHI: Central Punjab defeated Balochistan by 50 runs in the final to win the Pakistan Cup 2022-23 title at the State Bank Sports Complex here on Monday. Defending 255, Central Punjab fought back to claim the last five Balochistan wickets for 55 runs to dismiss the defending champions for 204 in 42.3 overs. Fast bowler Ali Shafique destroyed Balochistan’s middle-order by dismissing Abdul Wahid Bangalzai (4), Asad Shafiq (0) and Haris Sohail (8) to finish with impressive figures of 7-2-17-3.

Ali was well supported by fellow fast bowler Mohammad Ali, who came back strongly in his final spell to claim the wickets of Bismillah Khan and Yasir Shah to end with figures of two for 31. Left-arm spinner Zafar Gohar snapped up the wickets of Imran Butt (30) and Amad Butt (seven) to end with two for 32. Bismillah Khan fought a lone battle for Balochistan and finished as the top-scorer with 70 from 77 balls. His innings was studded with eight fours. Together with Mohammad Junaid (27), Bismillah put on 65 runs for the sixth wicket after Balochistan had slipped from 60 for no loss to 84 for five. Earlier, batting first after winning the toss, Central Punjab failed to fully capitalise on a 61-run first wicket partnership between Ahmed Shehzad and Mohammad Faizan to be dismissed for 254 in 48.2 overs, including losing their last eight wickets for 109 runs.

Left-arm spinner Mohammad Junaid was the wrecker-in-chief of Central Punjab’s batting when he picked up the wickets of Ahmed Shehzad, Qasim Akram, Zafar Gohar, Usama Mir and Mohammad Ali to finish with impressive figures of 10-0-56-5. Faizan scored 37 runs from 33 balls with three fours and two sixes before falling to Kashif Bhatti, who added the scalp of Junaid Ali (one) to finish with figures of two for 36. At 65 for two in 13.1 overs, Ahmed Shehzad was joined by top-scorer Tayyab Tahir and put on 80 runs for the third wicket before Junaid dismissed Ahmed and Qasim Akram off successive deliveries to reduce Central Punjab to 145 for four in 27.5 overs. Ahmed contributed 61 from 87 balls with three fours and a six.

Tayyab, in association with Zafar Gohar (30), then carried the score to 195 before his run-out in the 37th over derailed Central Punjab’s progression as the last five wickets tumbled for the addition of 59 runs in 71 balls – thanks to a 31-ball 34 by captain Aamer Yamin with two fours and a six. While Tayyab Tahir was adjudged player of the final, Amad Butt of Balochistan was declared player of the Pakistan Cup. By virtue of winning the title, Central Punjab received a winners cheque of PKR5million, whereas Balochistan had to settle with the cash award of PKR2.5million. The Pakistan Cup also brought an end to the 2022-23 domestic cricket season. Sindh won the National T20 and Northern won the Quaid-e-Azam Trophy, while Central Punjab swept the CA T20, CA Championship and CA Challenge tournament. Khyber Pakhtunkhwa won the National U19 Cup, while Sindh won the National U19 Championship.