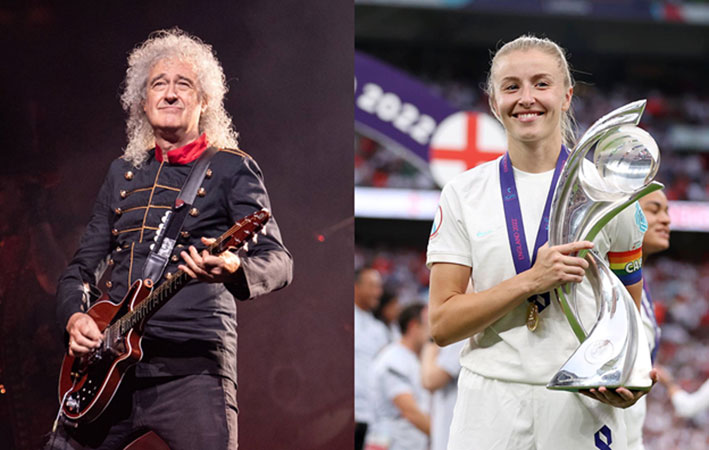 King Charles has announced his New Year Honours list for 2023, with England’s Lionesses and Queen guitarist Brian May among the recipients.

The first Honours list from the new King also features national treasures including Stephen Graham (OBE for services to drama) and Frank Skinner (MBE for services to entertainment), the latter of whom said he refrained from telling his family of the honour due to believing it was “some sort of administrative error”.

Brian May has been knighted in the list, while England captain Leah Williamson is made an OBE. MBEs have been awarded to teammates Lucy Bronze, Beth Mead and Ellen White.

On the list are 1,107 recipients, with a 50/50 gender split. Also included are athlete Denise Lewis, fashion designer Mary Quant and artist Grayson Perry.

Discussing the honour, May told BBC News: “This is a kind of licence, a kind of commission to carry on doing what I’m doing, and it gives me a bit more power to my elbow. So I’m very happy about that.”

Lucy Bronze added: “It’s something for my family that will make them very proud.”

Criticism around not awarding every member of the squad an honour has been answered by Sir Hugh Robertson, chairman of the honours sports committee, who said: “What we’ve tried to do is stick to the principle of the honours system which is to recognise excellence and to recognise extraordinary contributions.”

Otherwise, he added, “you get people who’ve done five minutes on the pitch… get an award”.

In 2022, Daniel Craig was awarded the title of Companion of the Order of St. Michael and St. George in the New Year Honours list, notably the same title held by James Bond.