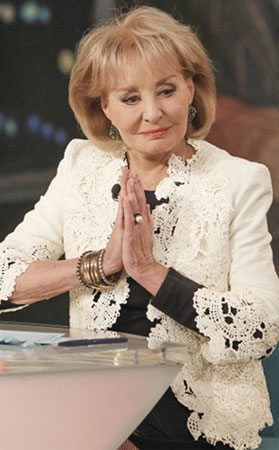 Barbara Walters, the broadcast journalist whose impressive career spanned over 60 years, has died, according to ABC News. She was 93 years old.

Bob Iger-the CEO of the Walt Disney Company, which owns ABC, Walters’ longtime employer-said she died Dec. 30 at her home in New York.

“Barbara was a true legend, a pioneer not just for women in journalism but for journalism itself,” Iger tweeted. “She was a one-of-a-kind reporter who landed many of the most important interviews of our time, from heads of state and leaders of regimes to the biggest celebrities and sports icons.”

He added, “I had the pleasure of calling Barbara a colleague for more than three decades, but more importantly, I was able to call her a dear friend.” Although her literary career, which included writing for Redbook Magazine, began early as the 1950s, Walters’ first television appearance was as a “Today Girl” on the Today show, where she ascended to reporter-at-large within just a year. In 1974, as co-host of the morning program, Walters became the first woman to hold that particular title for an American news show. In addition to Today, her career expanded over four more decades and included her being at the helm of various shows such as 20/20, ABC Evening News and The View-the last of which she created, produced and co-hosted.

Starting in 2010, Walters also hosted a SiriusXM show called Here’s Barbara, until stepping away from both her satellite series and her chair at The View in 2014.