* The cause of her death was not made public 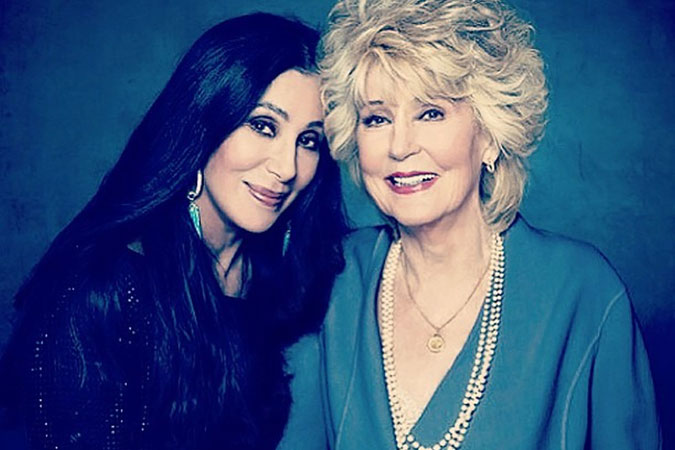 Cher is mourning the loss of her mom. Fellow singer and actress Georgia Holt has died at age 96. On Dec. 10, Cher wrote on her Twitter page, “Mom is gone.” A rep for the “Believe” singer also confirmed Georgia’s passing to E! News.

The cause of her death was not made public. Georgia had struggled with her health in recent months. In September, Cher tweeted, “Sorry I’ve Been Mia. Mom’s Been Sick Off & On. She Just Got Out of Hosp. She Had Pneumonia. She’s Getting Better.” In addition to Cher, 76, Georgia is survived by her life partner Craig Spencer, her youngest daughter, General Hospital actress Georganne LaPiere, 71, and Cher’s children Chaz Bono, 53, and Elijah Blue Allman, 46.

Georgia was born Jackie Jean Crouch in Kensett, Arkansas in 1927. She competed in beauty pageants and pursued singing before becoming an actress in the ’50s and ’60s, appearing on shows such as I Love Lucy and The Adventures of Ozzie and Harriet. Cher executive-produced a 2013 documentary about Georgia, titled Dear Mom, Love Cher. The same year, the singer’s mother released an album, Honky Tonk Woman. It’s first track, “I’m Just Your Yesterday,” features Cher.

In 2016, the pop star shared a recent photo of herself with her mother. “This is what 70 & 90 looks like in my family…” she tweeted. “Mom has NO MAKE UP ON.” The “Turn Back Time” singer is Georgia’s daughter with her first husband, John Sarkisian, who died in 1985. The two split when the pop star, born Cherilyn Sarkisian, was a toddler. Georgia would go on to marry six more times, including to John again in the ’60s, but each marriage did not last.

Georgia met her partner Craig at a quilt-and-bed boutique she opened in the posh Los Angeles neighbourhood of Brentwood and he moved into her home a month later, the magazine said. The two were in a relationship from 1976 until her death. Cher has offered glimpses of her life with Georgia on Twitter. “I love my Mom, but Ours Wasnt Always a Marriage Made in heaven,” she tweeted in September. “I Was Stubborn, a Strong, Willed little Child, I Was a Pony Who Couldn’t Be Broken, & It scared Her. I Hoped a Freight car when I Was 9. Read The Book.”

This past April, Cher tweeted, “SO SORRY,WAS AT MOMS & JUST CAME HOME. NO SERVICE AT MOMS,BUT SHE WAS SO HAPPY I STAYED WITH HER.SHE’S A YOUNGTER OF 96 & 2 TALK ABOUT OLD DAYS,& OLD MOVIES WITH ME. SHE TELLS ME ALL THE TIME”BABE,GETTING OLD ISNT FOR SISSIES”.I SEE & RESPECT HER ALL THE MORE.SHES A TUFF.