* Gisele, 42, and Tom, 45, filed for and finalised their divorce in October after 13 years of marriage 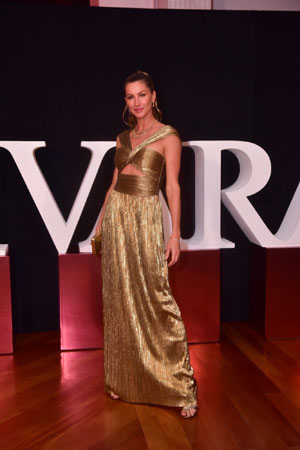 Gisele Bu?ndchen glittered in gold at her first public event following her divorce from Tom Brady. The supermodel attended a dinner celebrating the 60th anniversary of jewellery company Vivara in Sao Paulo, Brazil on Dec. 12. For the event, Gisele wore a gold gown and swept her hair back into a high ponytail. She finished off her look with a pair of drop earrings and a sparkly necklace.

Gisele, 42, and Tom, 45, filed for and finalized their divorce in October after 13 years of marriage. In their respective statements on social media, the former runway star and the Tampa Bay Buccaneers quarterback said they divorced amicably and expressed their gratitude for their time together.

They also noted they’ll continue to work as a team to raise their children. Gisele and Tom share son Benjamin, 13, and daughter Vivian, 10, and the athlete also has a son named Jack, 15, from his previous relationship with Bridget Moynahan. A source told E! News Tom and Gisele agreed on joint custody of their kids and their followers have already seen subtle signs of co-parenting support on social media.

“My priority has always been and will continue to be our children whom I love with all my heart,” Gisele said in her statement about the divorce. “We will continue co-parenting to give them the love, care and attention they greatly deserve.” While Tom and Gisele noted their decision to split was a tough one to make, they also made it clear they wish each other well.

“The decision to end a marriage is never easy but we have grown apart,” she continued, “and while it is, of course, difficult to go through something like this, I feel blessed for the time we had together and only wish the best for Tom always.”

Gisele had hinted about them each needing to do what makes them happy in an interview for ELLE’s October issue, where she discussed Tom’s decision to return to the NFL after having previously announced his retirement.

“Obviously, I have my concerns-this is a very violent sport, and I have my children and I would like him to be more present,” she told the magazine in the interview, which was released in September. “I have definitely had those conversations with him over and over again. But ultimately, I feel that everybody has to make a decision that works for. He needs to follow his joy, too.”

And Gisele noted she has more goals she’d like to accomplish. “I’ve done my part, which is be there for,” she continued. “I moved to Boston, and I focused on creating a cocoon and a loving environment for my children to grow up in and to be there supporting him and his dreams. Seeing my children succeed and become the beautiful little humans that they are, seeing him succeed, and being fulfilled in his career-it makes me happy. At this point in my life, I feel like I’ve done a good job on that.”

She added, “I have a huge list of things that I have to do, that I want to do. At 42, I feel more connected with my purpose.”