A Dangerous Business by Jane Smiley — madams and murder

* So begins A Dangerous Business, the latest from Jane Smiley, best known for her prize-winning 1991 novel A Thousand Acres, King Lear recast on an Iowa farm 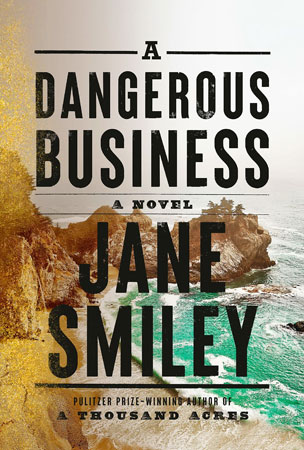 Eliza is not sorry when her husband dies. Peter Cargill is 20 years older than his 18-year-old bride and persuades her parents back in Kalamazoo, Michigan, that he will be a tender and supportive spouse.

But as they chase the gold rush and head out west, the opposite turns out to be the case. The year is 1851, and there is little recourse for Eliza against his cruelties: “He had made it clear that he intended to put it to her, whether she liked it or not, once or twice every day.” So when he’s shot in a bar fight in Monterey, it’s a relief. But how will the young widow support herself? Fortunate, then, that one Mrs Parks offers her work in a brothel. The place is spacious, with a nice veranda, “and the first fellow who came to her treated her much kindlier than Peter ever had”.

So begins A Dangerous Business, the latest from Jane Smiley, best known for her prize-winning 1991 novel A Thousand Acres, King Lear recast on an Iowa farm. She returned to Iowa more recently for the Last Hundred Years trilogy, a family saga stretching across the 20th century. In these and many other books she has proved herself a sensitive chronicler of the American scene. Yet A Dangerous Business is startlingly flat and unsatisfying. It is a mystery with no mystery, a book in which the characters develop not a whit.

The title clobbers the reader with the idea that prostitution has its risks: surely news to no one. And indeed, women and girls from the local brothel in Monterey start to disappear. In this place that is either an outpost of the frontier or “a handsome and pleasant town” – Smiley can’t seem to decide – Eliza and her friend Jean, inspired by their reading of Edgar Allan Poe’s The Murders in the Rue Morgue, determine to investigate.

It would be hard to spoil the plot of this predictable novel, but the person most likely to be the murderer turns out to be the murderer; apart from the poor slaughtered whores, everyone lives happily ever after.

What makes a good story? First, the sense that something is at stake; second, the characters that animate the plot. The situation here offers plenty of opportunity for danger, yet there’s very little sense of risk. Can it be true that young Eliza never feels imperilled by the work she does? Her clients are occasionally grumpy and sometimes a little odd, but that’s about the worst of it. Mrs Parks is her doughty protector, as far from an exploitative madam as it’s possible to be; her benevolence stretches credulity. As does the presence of Carlos, a “big fellow” whom Mrs Parks hires to keep the brothel workers safe. “When the customers weren’t around, he was friendly and relaxed, smiled often, and spent a lot of time improving his English so that he might eventually get a better job.” There’s your American Dream, then! Carlos is, incidentally, pretty much the only Hispanic presence in a place that had only become part of the United States the year before the novel begins. Jean, Eliza’s friend, runs a lesbian brothel that services exhausted housewives.

She dresses like a man much of the time; neither of these facts seems to cause her any trouble at all.

The book is full of these astonishments. Anything can be made believable in fiction, of course; but it is as if Smiley simply can’t be bothered to really look at what’s going on before her very eyes. Those bland adjectives: handsome, pleasant, big. What does “friendly and relaxed” mean? What is “a better job”? The list could go on and on. Worst of all, at the end of the novel Eliza is the same frank innocent she was at the start; she hasn’t learned anything and – more’s the pity – neither have we. A Dangerous Business by Jane Smiley is published by Abacus.