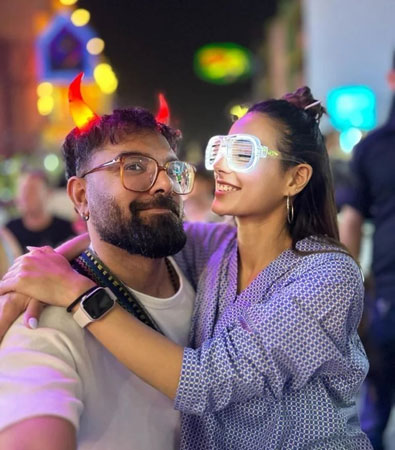 The ‘Jhooti’ actors, who got married in 2019 following a fairytale proposal at an awards ceremony, are celebrating three years of being together as a husband and wife today.

Being his witty self, Hussain wished his better half with a quirky anniversary wish along with a two-picture gallery from their flight on the gram. He wrote, “20 min baad hamari shadi ko 3 saal ho jaengy. Yeh time kesy guzra pata hi nahi chala (aap ko) 3 saal 3 min ki tarha guzar gaye (aap k) ( It will be 3 years to our marriage in the next 20 mins. Didn’t even realize where this time has gone by. 3 years felt like 3 minutes to you.)”

“Agar mujh se poochen toh agar mujhy dobara moqa mily tab bhi mai aap se hi shadi karna chahon ga, (For me, if I’ll ever get a chance again I’ll marry you only) Because I love you. Because you have a beautiful soul. Happy anniversary baby.”

On the other hand, Aziz also shared an adorable video of the couple from air plane and penned, “3 years of Togetherness, Love and beautiful Memories? I LOVE you.”

She also added the lyrics of an old Bollywood song in the caption to express her love for her husband.

For the unversed, the celebrity couple, Yasir Hussain and Iqra Aziz exchanged rings in June 2019 after the former went on his knees for his lady love during an awards ceremony. They got married the same year in a private affair witnessed by family members and celebrity friends. They welcomed their first child, baby boy Kabir Hussain in 2021.