* Readers of Purkiss's new survey of English food, a weighty 560 pages packed with morsels of culinary history, may feel similarly bombarded with riches 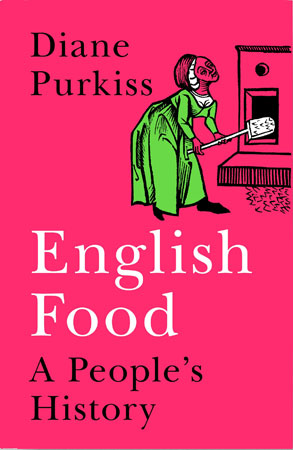 As late as the Regency period, Diane Purkiss informs us, middle-class dining custom dictated that soup and salad, sweet and savoury, were all placed on the table at once.

A typical course might consist of “curry of rabbit soup, open tart, syllabub, macaroni, pastry baskets, salmon trout, sole, vegetable pudding, muffin pudding, larded sweetbreads, raised giblet pie, a preserve of olives and a haunch of venison and buttered lobster” all arranged around a centrepiece, such as the wonderfully named “bombarded veal”. Once everyone had taken what they wanted, these dishes would be removed and replaced by a different selection and then, in turn, by several desserts.

Readers of Purkiss’s new survey of English food, a weighty 560 pages packed with morsels of culinary history, may feel similarly bombarded with riches. Her day job is as a professor of English literature, and it shows – the book kicks off with a line from Virginia Woolf on the gender divide in Cambridge college catering and is liberally seasoned throughout with literary references, from Anglo-Saxon poetry to Michael Ondaatje.

“English” food is, of course, bound up with many other culinary cultures, from India to France and Ireland and Purkiss acknowledges the challenges of pinning down her subject. She quotes Kipling: “What do we know of England who only England know?” though I would defend what she dismisses as the “English enthusiasm for bland flavours” as an appreciation of texture and subtlety – and the value of a really punchy condiment.

The book is divided into chapters that lay bare our ancient fondness for things like pig and cake, punctuated by a quartet of shorter essays on the subjects of breakfast, lunch, tea and dinner. She correctly identifies food as a subject “at once crucial to us and consigned to the margins of our lives”, rarely given the attention it deserves by serious historians despite its central role in events from the Great Fire of London to the Corn Laws.

Along the way we learn that the Wordsworths favoured a life of “plain living and high thinking”, which, it is claimed, prompted their friend Sir Walter Scott to revolt against the diet of “three meals a day – two of which were porridge”, and that the Dickenses’ dinner parties were felt to be somewhat vulgar. Purkiss, rather beautifully, likens Enid Blyton’s Anne sorting the Famous Five’s provisions to “a small uncomprehending Andy Warhol … pil up tins as riches”. On a less bookish note, my eye is caught by intriguing references to the Whitby polar bear, brought back from Greenland as a pet by the legendary whaler William Scoresby Sr and the poor cows that dwelt in dark dairies underneath the Strand.

All fascinating stuff, but English Food is at its strongest when addressing wider themes of uncomfortably contemporary relevance. I can’t help thinking of the tendency of certain politicians to evoke halcyon days of British self-sufficiency as I read about the grains found at a site in the Solent, which are thought to have come from the Balkans or southern France several millennia before the Roman conquest. The inconvenient truth, repeated in every chapter, is that these islands have always relied on trade – even as England was at war with Spain and Portugal, her fishermen were heading south to sell salt cod fished in the north Atlantic and cured in Newfoundland, to the Basques. A couple of hundred pages further on, it transpires – no one tell Liz Truss – that more than 70 percent of the cheese consumed here in the 1920s was imported, much of it from as far afield as New Zealand.

There’s a positively chilling account of the effects of a changing climate on a population reluctant to acknowledge reality. Purkiss explains that the hunger created by the beginning of the little ice age in the 14th century was seen as “an abnormality. The idea of what was meant to happen outlived the era when it was likely. Everyone went on expecting warm springs and the right kind of summers. Consequently, the food culture didn’t shift to adapt, not enough, not fully.”

The most striking, and one of the bleakest, narrative threads is the increasingly individualistic and market-driven nature of our food system. Purkiss traces the shift from a largely collective, if unequal effort, where landowners allowed their poorer neighbours to glean the leftovers from the harvest, or graze pigs in their forests, to the enclosing and clearing of land for sheep or machinery. England, I learn, is one of the few countries around the world where “the rivers, access to them and the right to fish them are in private ownership. Every inch of bank and every square foot of fishing rights from the moment the water emerges from the ground to the tidal estuary is owned by someone.” As Ian Niall’s 1950 work The Poacher’s Handbook plaintively demands: “Can a man own the clouds, the rain, the streams that trickle over the rocks?”

A parallel development seems to be our increasing impatience with regulation and the abnegation of government responsibility for food standards – an ongoing trend in the Brexit “bonfire of red tape” and reminiscent of the early 19th-century dissolution of ancient laws around baking. Done under the guise of freeing up the market, this led to a proliferation in the number of bakers, a consequent decline in trade and therefore in working conditions for all – with a knock-on effect on the quality of bread.

And of course, there’s the evergreen subject of “the poor”, whose eating habits were fodder for criticism long before Tory MPs were telling the House of Commons that food banks would be unnecessary if such people would only learn to cook. In 1821 the radical William Cobbett dismissed women who bought, rather than made, their own bread as “wasteful … indeed shameful”, apparently giving no thought to the fuel and labour costs involved. The accounts of women going hungry to feed their children a century later also feel depressingly familiar.

There’s an awful lot of good stuff to get your teeth into here. And yet sometimes the reader might wish, like the Very Hungry Caterpillar, that amid the wealth of material was one nice green leaf on which to rest and take stock. There’s a sense that, in her eagerness to include as much as she can, Purkiss hasn’t stopped to check smaller details – HP and Harvey’s sauce are very different things; Janet Keiller of the Dundee marmalade origin story was James’s mother, not his wife – or interrogate sweeping statements, such as the startling claim that “at the beginning of the 20th century, few people had even tasted one freshly laid egg in their lives”.

The slightly confusing conclusion – “Sometimes food is what we want or need to forget. For something else. Manners. Friendliness. Sociability. Love. Family” – feels like it was rushed, and this reader would have liked to learn more about the brief life of the Jewish Bakers Union, the link between poor dental health and the Victorian appetite for mushy macaroni, and countless other tantalising references which sent me scurrying to the footnotes, bowl in hand. However full you are, it seems there’s always room for a little bit more. English Food: A People’s History by Diane Purkiss is published by William Collins COURTESY THE GUARDIAN