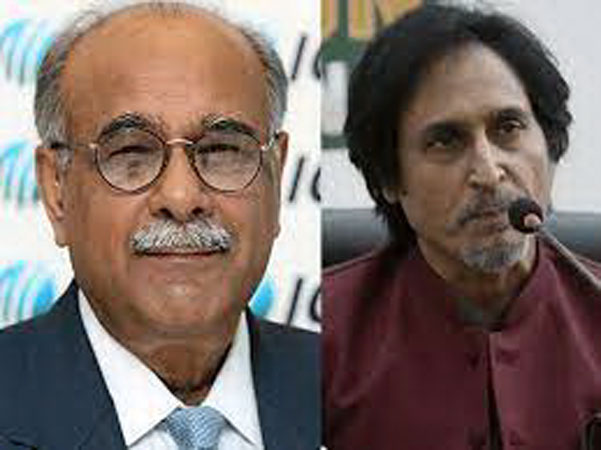 LAHORE: The Pakistan Cricket Board (PCB) on Wednesday expressed its disappointment over the comments made and language used by former chairman Ramiz Raja against newly installed PCB management committee chairman Najam Sethi on a social media platform and in a TV interview. “The PCB believes former chairman Ramiz’s comments are aimed at tarnishing and damaging the impeccable reputation of present chairman Sethi,” said a press release of the PCB. The release added that the PCB reserved the right to pursue legal proceedings to protect and defend the image and credibility of its chairman and the institution. Ramiz and other PCB board members were replaced by a 14-member management committee, led by former board head Sethi, by Prime MInsiter Shahbaz Sharif, who recently replaced Imran Khan as Pakistan’s Prime Minister. The committee has 120 days to change the PCB’s constitution, bringing back the 2014 version, which was replaced in 2019.

Ramiz had called the federal government’ s move to remove him as PCB chairman after just one year into a three-year term ‘political interference.’ Politics should not be mixed up in cricket,” Ramiz said on his YouTube channel. “This is a game of cricketers and a playing field for them. Some people come from outside the circle, and to adjust one person (Sethi), they had to change the entire constitution. I have not seen this anywhere in the world,” Ramiz added. “Only in Pakistan, this can happen that you change the constitution to adjust a person or to bring in his thugs.”

The PCB press release said the patron (the Prime Minister of Pakistan), on the popular demand of cricket fans, administrators as well as former and current cricketers, exercised his constitutional right by restoring the PCB constitution 2014 to safeguard the livelihoods, wellbeing and careers of professional cricketers as it recognised the role of departmental cricket, which was not the case in the PCB constitution 2019 promulgated by the PTI government.” The release said PCB chief operating officer Salman Naseer had already rebutted Ramiz’s allegations that he was not allowed to collect his belongings by confirming these were picked up personally by him and were returned to Ramiz yesterday as a part of the usual handing and taking over process. “Ramiz was never stopped from entering the Gaddafi Stadium premises and will be welcome to visit any time in future.”

The release said Sethi, who was elected as the PCB’s 34th chairman in August 2017 for a three-year term, had voluntarily resigned with two years remaining in his tenure after his nominating authority had lost the 2018 general elections in July. This clearly indicates his approach and positive attitude. “It is common knowledge that 10 days after Ramiz was nominated on the Board of Governors on 27 August 2022 by the then patron, former captains and Pakistan stalwarts Mishab-ul-Haq and Waqar Younis were on 6 September 2021 made to “step down” as head and fast bowling coaches, respectively. Just over a month later and 16 days before the first match in the ICC Men’s T20 World Cup 2021 against India, three changes were made in the squad.”

The release further added that former chairman Ramiz’s comparison about his and the current chairman Sethi’s expenses during his previous term was misleading and inaccurate as the circumstances were incomparable. “All travel expenses and other expenses were approved by the appropriate authorities and were duly audited (internally and externally). It is clearly established there were absolutely no improprieties in Sethi’s expenses during his previous tenure.”

The release said Sethi is one of the most distinguished, respected and renowned personalities of the country who has not only won three international press freedom awards but is also a recipient of Hilal-e-Imtiaz. He has launched three media houses, served in the federal cabinet and was appointed as an all-parties consensus interim Chief Minister of the Punjab province in 2013. He has twice headed the PCB, while he also launched and headed the Pakistan Super League from 2016-2018. These not only confirm his international popularity, standing and credibility, also reflects his credentials as a skilled, qualified and experienced administrator. The PCB expects following the above explanations, former chairman Ramiz will refrain from leveling unsubstantiated and baseless allegations against Sethi, which can potentially damage the cricket brand, the organisation as well as its figurehead”.