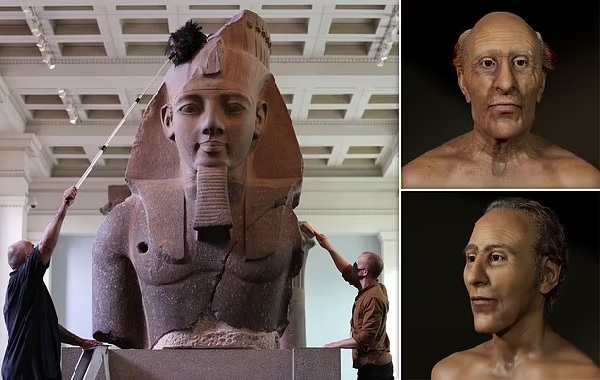 For the first time in 3,200 years, Ramesses II, the most powerful pharaoh in ancient Egypt, can be recognised by his “handsome” visage, owing to a new scientific reconstruction.

Scientists from Egypt and England collaborated to capture the king’s likeness at his time of death, using a 3D model of his skull to rebuild his features.

Then, they stopped the ageing process and almost turned back time to reveal his face at the height of his prowess.

The monarch that was shown, according to Sahar Saleem of Cairo University, who made the 3D model of the skull, was described as being “extremely attractive.”

“My imagination of the face of Ramesses II was influenced by his mummy’s face. However, the facial reconstruction helped to put a living face on the mummy,” Daily Mail quoted her saying.

“I find the reconstructed face is a very handsome Egyptian person with facial features characteristic of Ramesses II – the pronounced nose, and strong jaw,” she added.

She said: “We take the computer tomography (CT) model of the skull, which gives us the 3D shape of the skull that we can take into our computer system.”

Then, she added, they imported pre-modelled facial anatomy from a database and modified it to fit the skull. Thus, the face was essentially constructed starting from the surface of the skull and moving through the muscular structure, fat layers, and skin layer.

We all have about the same muscles from the same origins with the same attachments, Wilkinson explained.

According to Wilkinson, approximately 70% of the surface of a facial reconstruction has a form inaccuracy of less than 2mm.

“This is the only scientific facial reconstruction of Ramesses II based on the CT scan of his actual mummy,” Saleem continued.

‘Previous attempts were non-scientific and mostly artistic based on his mummy’s face.’ The reconstruction debuted in a French documentary, L’Egypte, une passion française, aired by the France 3 channel.