* PPP chief says her mother was voice of the poor, ambassador for the destitute, a true supporter of democracy and a strong reply to terrorists
* Urges PTI chief to return to parliament as neither he nor his party can 'bear what's coming to them' 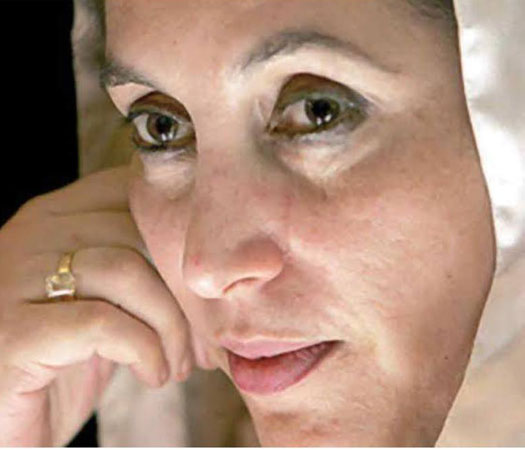 “This journey will be completed by us together,” he said in an address at the party’s power show in Garhi Khuda Bux to mark the 15th death anniversary of Benazir Bhutto.

Bilawal said that miscreants behind Benazir’s assassination thought they would halt her party’s journey forward. “I want to tell them to come and see how many people gathered here in Garhi Khuda Bux.

Even after all these years, Bibi’s jiyalas are still present here. “These people have shown their loyalty towards her and have proven that they have not forgotten Benazir or her political ideas. We believe it when we say ‘aj bhi Bhutto zinda hay’,” he asserted.

Bilawal said that his mother was a patriotic Pakistan, and her name was marked in not only the country’s history but across the world. “She was the voice of the poor, an ambassador for the destitute, a true supporter of democracy, and a strong reply to terrorists. She believed in the politics of hope […] of truth […] and of unity.”

PPP chairman stressed, “It is our responsibility to follow Bibi’s vision and achieve the mission she had set out on. President Zardari and I tried to take her mission forward and whatever work is left we will be completed in the next 15 years.” Bilawal said the establishment’s decision to remain apolitical has “politically orphaned selected” Pakistan Tehreek-e-Insaf (PTI) Chairman Imran Khan and the likes of him.

Bilawal also said the PTI will keep pushing, inciting and seeking the establishment’s help, but vowed that the party will ensure that no unconstitutional move would be taken.

“Imran, in his rallies, has been using words that are tantamount to Article 6 [treason] and inciting the establishment to help him,” the foreign minister said, asking the PTI chief to return to parliament as neither he nor his party “could bear” what’s coming to them.

The foreign minister went on to say that he did not want his political opponents to endure what his party workers had to go through. “But we also have to run the system, this cannot go on.”

In his address, the foreign minister also linked the uptick in terrorism to Imran’s election as the prime minister and slammed the PTI chief for trying to reason with terrorists during his tenure.

“Benazir Bhutto lost her life fighting terrorism. We also initiated operations against terrorists, but who gave this cricketer [Imran] permission to negotiate with terrorists?” he asked.

Bilawal asked upon whose authorisation the ex-PM “bowed down to the terrorists and indulge in negotiations with them”. “Who freed terrorists from jails? Who allowed terrorists to live here and neither accept the Constitution nor lay down their weapons?”

The PPP leader added: “Today, terrorism is rising once again […] as a cricketer was turned into a prime minister.” The coalition government, he said, would use all-out measures to break the back of terrorists.

Bilawal also said that during the PTI’s tenure, Pakistan suffered the worst economic crisis and to save his seat, “Imran committed a suicide attack on the economy”.

He added that “for the first time”, Pakistan is facing a threat of default, but the coalition government steered clear of it.

The PPP chief also said that floods were “a doom’s day before the doom’s day”. The country suffered losses worth $30 billion during the climate catastrophe and one-third of the land was inundated, he added. “Land extending to 5 million acres was destroyed. 50% of educational institutions in Sindh were affected,” Bilawal said, adding that had such deadly floods hit any other country, political activities would have taken a back seat, but in Pakistan, it did not happen.

He once again slammed Imran for continuing to bicker against the government and holding rallies despite the people suffering at the hands of the climate catastrophe. The FM said countries cannot run in such a manner and asked his political opponent “to act like a human being”.

During his address, the foreign minister called on his rivals to “become humans before politicians”. “In any other country, politics and rallies would have come to a halt after the havoc wreaked by the floods. But even in the midst of a catastrophe, the fight for Punjab kept taking place, and [Imran’s] long march did not stop.

“On one end there is Imran and his ego and on the other end, we have flood affectees. It will take time to fix all this,” he said.

Bilawal pointed out that Pakistan was still trying hard to collect money from the world for flood-hit people and estimated that the country needs at least a year more to collect $15 billion.

Earlier in the day, a large number of party workers arrived in the city from Larkana to attend the event. Party workers in Karachi left from Sohrab Goth where a camp was set up to see them off.