* I reported from the European Commission in Brussels, penned business stories from the Tour de France's visit to Denmark and courtesy of a Sunderland-based factory 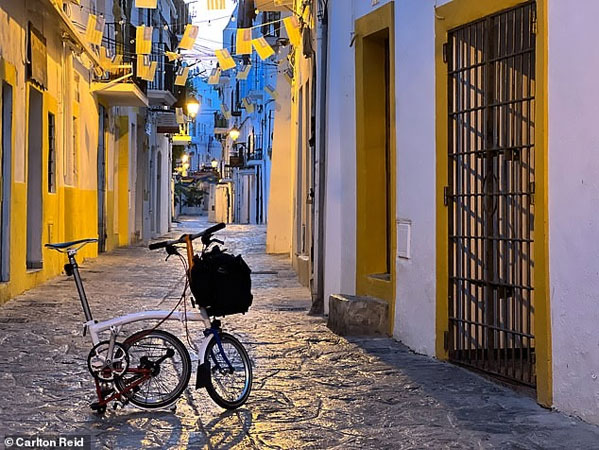 I’m a volunteer puppy raiser for Guide Dogs. Our family nurtures and socialises tiny pups until they’re ready to leave for full-on training. We look after one dog at a time and I’m the primary carer because, unlike my hospital doctor wife, I work from home. Our latest pup left to start her new life in March and we’re not getting another until the end of December.

It was achingly sad to say goodbye to Berry but, on the upside, I then had the best part of nine months in which to travel on commission for magazines and newspapers.

I reported from the European Commission in Brussels, penned business stories from the Tour de France’s visit to Denmark and courtesy of a Sunderland-based factory, swanned around Sweden on a swanky press launch for a new electric car. And for MailOnline Travel, I wrote stories on trips to Ibiza, Belgium, Switzerland and more.

As a sustainability specialist, I felt it would be hypocritical of me to fly on any of these European trips. Even though I travelled as far north as Stockholm and as far south as Sardinia, I didn’t use any budget or scheduled airlines. This was a self-imposed flight-free pact made easier – but not cheaper or quicker – by using high-speed trains and slow-speed sleeper services. I didn’t always stay on the ground. Sometimes, the only option was to take to the water, and I island-hopped by ferry and even crossed the Dover Strait on a catamaran.

On most of the trips, I travelled with a folding bike, a last-mile vehicle that didn’t faze any of the hotels I kipped at, including a capsule offering in Zurich and a five-star residence in Rome. With my own sets of wheels – usually a Tern Verge, a folding bike with a clean belt drive instead of a dirty chain – I never had to worry about infrequent buses, round-the-houses taxi drivers or the right payment card for Metro systems.

On the two trips that I didn’t pack a bike, I hired one in London. For a fiver, you can hire a Brompton folding bike for 24 hours, pick one up at a rail station and drop it off at another. En route to Sweden – where I planned to do some open-sky camping – I hired one of these nifty little folders at King’s Cross and rode 22 miles to Runnymede to spend the night in a sleeping bag beside the tranquil Thames. Tranquil, until I was woken by revellers on a strobe-lit party boat singing drunkenly to 1980s dance tunes.

Returning from a summer trip to the French Alps, I arrived at King’s Cross at midnight, which was too late for a train to Newcastle, so I hired a Brompton and rode more than 90 miles through the night to Peterborough before getting an early LNER train north on the swift East Coast Main Line.

Not everybody wants to travel by bicycle and flying is routine but, within Europe at least, it will become increasingly more difficult to fly. For instance, the European Commission has just given the go-ahead for France to ban flights between Paris-Orly Airport and Nantes, Lyon and Bordeaux – more cities will surely follow.

At the start of December, my last long trip for the year involved a seven-hour 20-minute train journey between Milan and Paris. With the opening of a 36-mile tunnel currently being built under the Savoy Alps, this time will soon be cut almost in half.

However, when the line between Lyon and Turin is upgraded to subterranean high-speed, travellers will kiss goodbye to glorious views of the Alps. And this visual aspect of ground travel will be one of my abiding memories of these manic months of trans-European travel. I like watching the world go by from a train window, especially when I am lucky enough to travel first class on Eurostar, a pampered fine-dining service, or sit in a standard-class buffet car on a Swiss train, which is also a premium offering.

As a digital nomad, I can work on trains, which is not something I tend to do when I fly. Short-haul European flights are over quickly, and it’s such a hassle to get through airports that I’m generally in no mood to work, preferring to doom-scroll or, like many other fliers, watch smartphone-sized comedy episodes. Entertaining but far from productive.

On a recent 15-hour train trip from Milan back to my home in Newcastle – 4G enabled the whole way – I wrote several articles, answered numerous emails, and even broke the back of what I’d been putting off for months: end-of-year book-keeping via an app that requires a persistent online connection.

For eye-watering fees, I also stayed connected while travelling on the three DFDS ferry crossings from Newcastle to Amsterdam I’ve done this year. These overnight trips are slow, but what’s not to like about starting and ending trips with what are, in effect, mini-cruises? I’m now particularly fond of the à la carte dining in the ship’s North Sea Bistro. Book an early sitting and you dine as the sun sets over the Yorkshire Coast.

All three crossings were flat and calm, as was another crossing on a decidedly smaller vessel. The 12-metre Mago Merlino wind-powered catamaran, which I boarded in Dover to cross to Boulogne, was chartered by SailLink, a startup that plans to run a return daily ferry service from spring next year.

There is no room for cars – this is an eco service for pedestrians and cyclists. The one-way fare is likely to be £85, nearly three times the price of P&O’s 90-minute Dover-Calais crossing. ‘This is a new form of public transport,’ SailLink founder Andrew Simons told me, ‘and a serious sailing experience at the same time.’

We left Dover at 5pm, landing in Boulogne on schedule four hours later, the catamaran’s sails bathed in the faint orange glow of a rising harvest moon. There was just one other passenger on this pilot trip, but with the chartering of a larger vessel, Simons plans to ferry 12 passengers and 12 bikes, with space for wheelchairs too.

With only one car ferry service to Calais currently open to foot traffic – and no bikes allowed on Eurostar – SailLink says it will offer a much-needed car-free alternative.

Having never been on a yacht, I expected to be thrown around by the waves and was prepared to be seasick. Neither happened. I even ate a picnic meal of bread and cheese. We never got close to any big ships, but being out on an open deck, close to the waves, gave a greater appreciation of the power of the sea.

Once in Boulogne, there was no border control to endure – I climbed to the marina clubhouse and showered in the Schengen Area untroubled by passport checks.

Border police arrived mid-morning the following day, proving this is a more relaxed entry into France than the often-fraught journeys on the car ferry services between Dover and Calais.

As we arrived late, I stayed on board in one of the catamaran’s bedrooms. Small, yes, but larger than all but presidential suites on commercial airliners.

Also small were the beds on the two European sleeper trains I took during the year, north to Stockholm and south to Innsbruck. The sleeper to Stockholm left from Malmo. I was on the service to see how overnight train travel in Sweden feels ahead of the September launch of an overnight train from Hamburg to Stockholm, described to me as a ‘gamechanger’ by rail travel expert Mark Smith.

The EuroNight service, run by Sweden’s national rail operator SJ, ‘gets you from London to Stockholm in pretty much 24 hours,’ according to Smith, who operates the much-consulted Seat61.com website. It is the ‘missing link’ for travellers from the UK to Sweden, he said, perhaps persuading many to take the train rather than fly. It starts with the Eurostar from St Pancras to Brussels and then transfers to a high-speed line to Hamburg, after which the speed drops but comfort rises.

EuroNight covers the 670 miles from Hamburg to Stockholm in 13 hours, starting at 9pm, stopping off in Copenhagen and arriving in Stockholm at 10am.

An en suite bathroom, albeit a tiny one, is a luxury on any train – and available only as a first-class option on this new service.

I found it a squeeze to shower on my night train to Stockholm – which runs along the same route as the EuroNight service – and I’m small.

Bending down to retrieve dropped soap, I struggled to get up again. ‘You have to soap yourself all over, and then you’re slippy enough not to get stuck,’ laughed train host Jeanette Andreasson when I told her about my predicament upon arriving in Stockholm.

Breakfast wasn’t served on the train but in the hotel opposite Stockholm Central station. There I caught up, via Zoom, with Maja Rosen, co-founder of the We Stay on the Ground organisation that coordinates the ‘flight free’ movement, now with chapters worldwide.

Rosen lives on an island three hours north of Stockholm and has not flown since 2008. She said that if it has to be done at all, travel should be by train, ferry, on foot, or by cycle. Flying has to be curtailed, she believes, or there will not be much of a world left to see.

‘We need to be cutting emissions now, but it’s also about making a statement. Pledging to go flight-free is a very effective way to make people around you realise that we need to change how we live. We can’t continue with business as usual,’ Rosen said.

‘There are so many ways to explore the world without flying.’

Rosen’s right, of course, but train travel isn’t cheap, which is a massive barrier to greater take-up. Governments could level the playing field by increasing taxation on flying. It’s well understood that our addiction to short-haul flights in Europe is harmful to the planet.

According to ecopassenger.org, my train journey to Stockholm emitted 49kg of carbon dioxide, while a plane making the same journey would emit as much as 380kg per person. Not only is fuel used more efficiently, but the sleeper train to Stockholm runs on renewables.

Until recently, Swedes were among the most profligate flyers on the planet. This love affair with flying is fading fast because the climate crisis is particularly noticeable in Sweden. Travelling by train instead of flying is deemed by many to be ‘virtue signalling’. There’s even a new Swedish word for this virtuous feeling: tagskryt – ‘train bragging’ – or how some people, myself included, crow about their long-distance journeys by train when others fly.

I certainly did more than my fair share of long-distance train travel in 2022, but the only tagskryt I’ll be doing in 2023 will be of the local variety. As a Guide Dog puppy raiser, I get a free travelcard for use on the Tyne & Wear Metro system.