Aima gives a poetic touch to her pictures 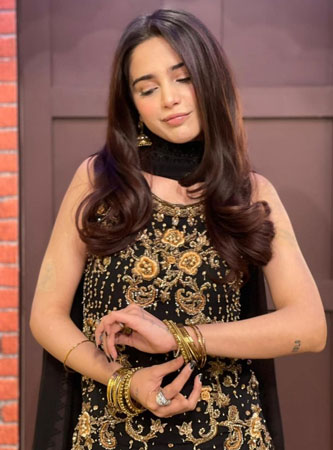 It is not easy to become a singer because it requires a passion for success and winning the hearts of music lovers with a beautiful voice and heartwarming melodies.

The singers learn different forms of the craft whether classical, contemporary or modern. The artists have to try new things or sometimes stick to their comfort. It all depends on their fanbase. Music fans are the one who makes an artist a superstar or target of memes. Things become viral within moments as it is the time of digital innovation.

Aima Baig has proved her mettle in this era. She has won the hearts of her fans and admirers with her beautiful songs and their beautiful melodies.

The singer does sold-out concerts not only in Pakistan but across the world. She makes audiences groove to the songs and performances.

Aima Baig became Spotify’s most-streamed female artist in Pakistan for 2021. She said her dream came true. She was thanked for her amazing work this year by the music streaming portal. The celebrity has proved herself as a star. Naturally, a celebrity has to interact with her admirers through different platforms whether they are on or off-screen interviews and social media. Aima Baig is active on Instagram with millions of followers. She treats fans to visuals of her personal and professional endeavours.

Recently, she shared pictures of her in an elegant purple kurta. She gave a poetic touch to the caption.

Aima Baig is one of the most followed local celebrities in the country, boasting close to five million followers.

As far as her personal life is concerned, Aima Baig exchanged rings with Shahbaz Shigri in March this year. They used to make headlines through romantic and heavily cheesy Instagram posts for each other.

The duo broke up in September this year.