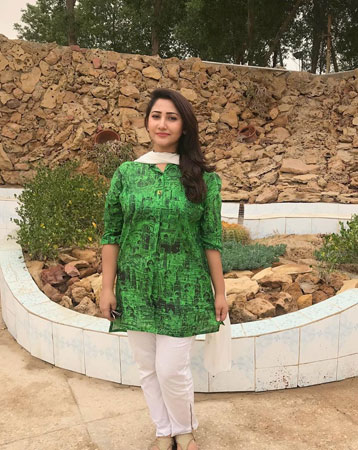 The clip won social media. It has thousands of likes. Netizens made hilarious comments on her latest post.

A netizen wrote, “Seriously”. Another wrote, “Its reality”. A third user stated: “Always Beautiful” while a fourth stated, “Very cute”.

Nadia Hussain Khan is one of the prominent names in the Showbiz industry. Not only has the celeb had a successful modelling career for almost two decades but has also made her mark on the small screen with successful projects like “Benaam”, “Jalan”, and “Saans”.

Moreover, Nadia Hussain Khan, 43, owns a salon and a beauty line, and holds a strong social media presence as well, with thousands of social users following her.

Earlier, she took to her account on the video-sharing application TikTok and published a hilarious lip-sync video of herself on the feed, which went viral across social media platforms.

The showbiz celeb can be seen mimicking a funny script of a girl in the clip, where she naively asks her lover to pay their electricity bill of 10,000. “Dil nahin chahiye, (Don’t want [your] heart),” she wrote in the caption of the TikTok video. The viral TikTok video of Nadia Hussain was watched by thousands of users of the social site and also received hundreds of compliments for the actor.