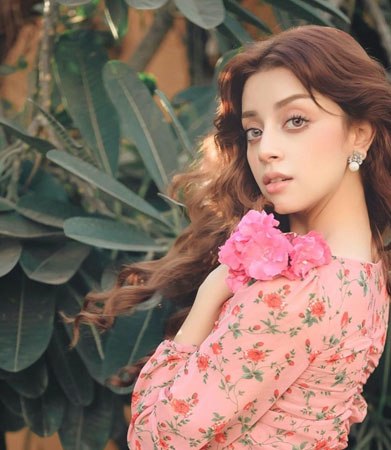 Pictures of actor Alizeh Shah in an elegant pink kurta have been going viral on the social media application Instagram.

The viral pictures see the actor-model holding a flower while dressed in pink. She used a flower emoji as a caption.

“It’s like a beautiful flower holding a flower?,” a user wrote. Another stated, “You always look so mesmerising and elegant.”

The “Mera Dil Mera Dushman” star takes to the picture and video-sharing platform to keep fans updated with her personal and professional happenings. Her social media posts go viral and get thousands of heartwarming reactions from netizens.

She shared pictures of her on the sets of “Taqdeer” drama and it went viral. She was in a pair of blue-washed denim with a black knitted tank top. The actor styled the look with a matching embellished stole around her neck and wore her long hair in curls with fringes and doll face makeup.

The celebrity has proved her mettle in the acting industry with her performance in ‘Dil Mom Ka Diya,’ “Mera Dil Mera Dushman” and the telefilm ‘Chand Raat Aur Chandni.’

On the work front, she is currently being seen essaying the lead role of Romaisa in the drama serial ‘Taqdeer.’ Her character is that of an only daughter of the family whose wishes are everyone’s command. However, she does not like and everyone else adores her humble attitude and innocence.