* 'Happy birthday my love… my anchor… my rock!' Saeed wrote on the photo and video sharing application along with several glimpses from the intimate celebration on Sunday 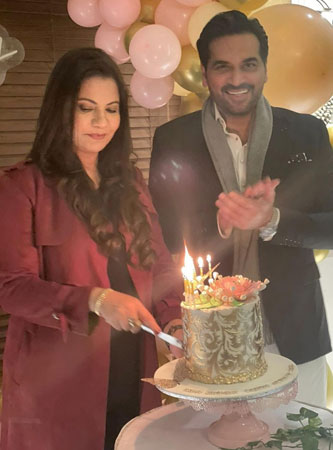 “Happy birthday my love… my anchor… my rock! May Allah give you everything your heart desires,” Saeed wrote on the photo and video sharing application along with several glimpses from the intimate celebration last night.

He added, “May Allah bless you with the healthiest & longest life. Here’s to celebrating many many many more together insha Allah.” Close family members and showbiz celebs including Adnan Siddiqui, Khalil ur Rehman Qamar, Hamza Ali Abbasi and his wife Naimal Khawar among others were spotted at the birthday bash. Samina’s sister and producer Sana Shahnawaz was also present at the event and posted a celebration reel on the gram. She wrote, “Happppppy birthday to the woman who has always looked after me with so much love and taught me a lot of things, everything…and always stood by my side as a mother, best friend.” Several social users including celebrities also extended their wishes for the birthday girl. For the unversed, Samina Humayun Saeed is a celebrated drama producer of the country. She along with her sister Sana Shahnawaz owns the banner Next Level Entertainment and has credits for acclaimed serials including ‘Sinf-e-Aahan’, ‘Amanat’, ‘Bikhray Moti’, ‘Do Bol’ and ‘Daddy’ among others.

She tied the knot with superstar Humayun Saeed in 1995, and the two are one of the top power couples in the industry.