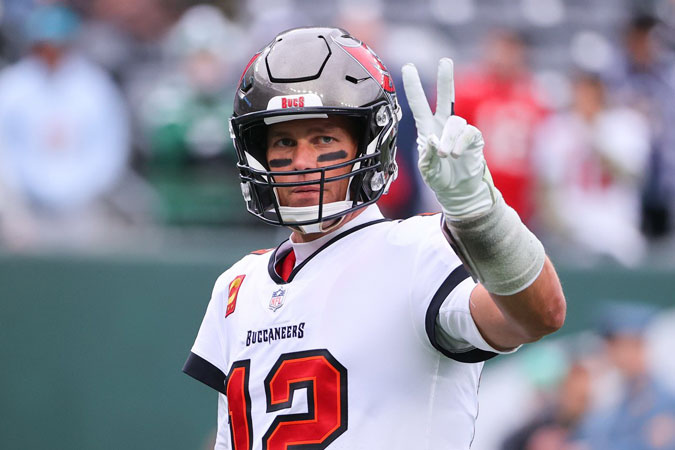 MIAMI: Tom Brady marched Tampa Bay 66 yards in nine plays in overtime to set up Ryan Succop’s game-winning 40-yard field goal on Sunday that gave the Buccaneers a dramatic 19-16 victory at Arizona. Seven-time Super Bowl champion Brady completed 32-of-48 passes for 281 yards and a touchdown, with two interceptions, but sparked the Bucs to score the final 13 points in a crucial triumph for Tampa Bay’s NFL playoff hopes.

“Tougher than we should have had and tougher than we wanted,” Brady said. “They played really well on defense and we had some long fields and turnovers again but we grinded it out and found a way to win.” The 45-year-old quarterback, playing in his first Christmas contest, won his 11th regular-season overtime game as the Bucs improved to 7-8 to stay one game atop Carolina and New Orleans in the NFC South division. Tampa Bay can clinch the division crown and a playoff berth with a home victory next Sunday over Carolina. Had the Bucs lost to Arizona, they would have needed to beat Carolina to keep any playoff hope alive. “We’ll lick our wounds, regroup and try to be at our best next week,” Brady said. “We’ve got to go home and play a huge game on Sunday. “It will take our best. We haven’t had our best for 60 minutes yet. We’ve got to bring it. Going to be a really tough game.” James Conner’s 22-yard touchdown run with 10:47 remaining gave Arizona a 16-6 lead, but just 2:44 later, Brady flipped a three-yard touchdown pass to Rachaad White to lift the Bucs within three. Tampa Bay’s William Gholston recovered a fumble with 4:53 to play at the Arizona 45-yard line to set up Succop’s third field goal, a 42-yarder with 2:27 remaining, to lift the Bucs level and set the stage for overtime.

The Cardinals, already eliminated from playoff contention, suffered their seventh loss in eight games. At Miami, Aaron Rodgers threw for 238 yards and a touchdown while Green Bay defenders intercepted three passes in the fourth quarter of the Packers 26-20 triumph over the host Dolphins. The Packers improved to 7-8, level with Seattle and Detroit and one-half game behind Washington for the final NFC playoff berth.

Green Bay picked off Miami’s Tua Tagovailoa to set up field goals of 28 and 26 yards by Mason Crosby and a final Packers interception by Rasul Douglas in the dying seconds sealed their third victory in a row. “A special day for us. Our defense came up and played outstanding,” Rodgers said. “We were down 20-10 and scored the last 16 points. Offensively we struggled in the red zone. But this was special.” The Dolphins suffered their fourth consecutive defeat and fell to 8-7, clinging to the last AFC playoff berth by a single game over four rivals with two games remaining.

“I’m really proud of our team,” Rodgers said. “We found a way to win and the way our defense stepped up the last few drives was outstanding.” The Packers finish with home games in frigid Green Bay against Detroit and Minnesota, who play in enclosed venues. “Couple of dome teams coming in,” Rodgers noted. “It has been cold up in Green Bay.”