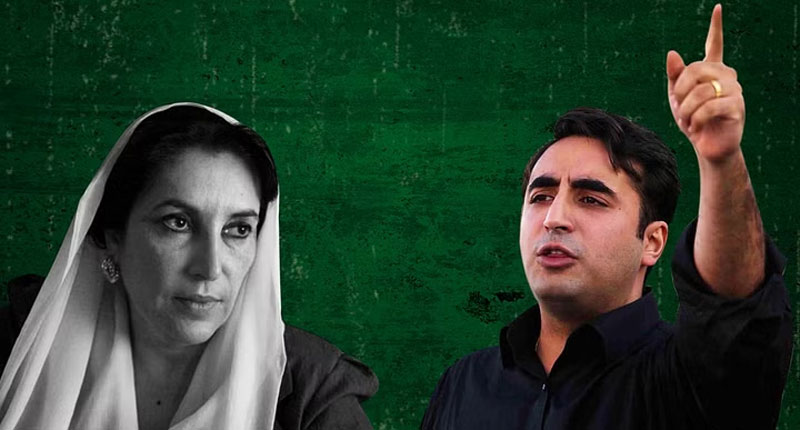 Chairman of Pakistan People’s Party (PPP) and Foreign Minister Bilawal Bhutto Zardari on Monday said that Shaheed Mohtarma Benazir Bhutto’s vision and philosophy of reconciliation was a feasible strategy to resolve domestic and international issues as well as a world’s shared legacy.

In his message issued by the PPP media cell of Bilawal Bhutto Zardari House on the eve of the 15th martyrdom anniversary of Shaheed Mohtarma Benazir Bhutto, the chairman PPP paid glowing tribute to her and said that they remembered her every day and got guidance from her vision and ideology, adding that she was a charismatic leader with an understanding far ahead of her time, which was born in centuries.

“Shaheed Mohtarma Benazir Bhutto always taught never to hate anyone and to forgive others,” he added.Chairman Bilawal Bhutto Zardari briefly referred to the services rendered by the ‘Daughter of the East’, saying that she was the architect of the democratic struggle in Pakistan, as well as the defender of the rights of the downtrodden classes and minorities; the pioneer of the practical struggle for the development and empowerment of women in the country; an advocate of civil liberties; advocated harmony and unity among federal units and was an unquestionable symbol of federalism. “It is also the achievement of Shaheed Mohtarma Benazir Bhutto’s ideology that the democratic forces in the country today are on the same page and are determined to tackle the challenges facing the nation,” he said. He reiterated his determination that the PPP, while strictly adhering to the ideology and philosophy of Shaheed Mohtarma Benazir Bhutto, would continue its struggle to eradicate poverty, hunger, and unemployment from the country, and establish a society based on tolerance, equality, and brotherhood.

He further stated the PPP was also determined to continue its struggle to make Pakistan a strong democratic federal country and a role model for the Islamic world, to ensure social as well as economic justice by strengthening the parliament and democracy.