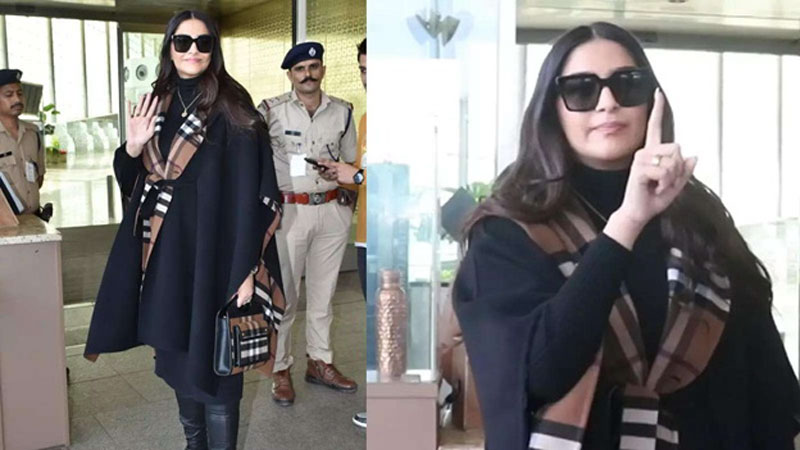 Actor Sonam Kapoor has requested the paparazzi not to click pictures of her son Vayu Kapoor Ahuja. Taking to Instagram on Sunday, a paparazzo account shared a video of Sonam at the Mumbai airport. The actor was dressed in a black and brown outfit, black boots, and dark sunglasses. She also carried a matching bag.

In the clip, Sonam walked towards the entrance of the airport as she looked for something inside her bag. When the paparazzi asked her to wait near the gate of the entrance, Sonam obliged. She smiled, posed, and waved at the paparazzi.

Before entering the building, Sonam told the photographers, “Mera beta araha hai, uska picture mat lena, hann (My son is coming, don’t click his pictures, okay)?” As the paparazzi assured her they won’t, Sonam replied, “Thank you so much. Thank you,” while keeping her hand on her chest.

Sonam and her husband Anand Ahuja welcomed their baby boy Vayu Kapoor Ahuja on August 20, 2022. Announcing the birth of the little one, Sonam had shared a note on Instagram. It read, “On 20.08.2022, we welcomed our beautiful baby boy with bowed heads and hearts. Thank you to all of the doctors, nurses, friends and family who have supported us on this journey. It’s only the beginning but we know our lives are forever changed…”

Recently, Sonam wished her father, actor Anil Kapoor on his birthday with an Instagram post. Sonam shared a string of pictures. In one of the pictures, Anil held his grandson Vayu in his arm, with an adorable smile on his face. She captioned the post, “Happy happy birthday to the best dad in the whole world. I love you. You’re the greatest and the best. Everything you do, you do for us. Everyone should be this blessed. Love you Daddy.”

Sonam will be next seen in the upcoming crime thriller film Blind, which is an official Hindi remake of a 2011 Korean crime-thriller by the same name, directed by Ahn Sang-hoon. The official release date of the film is still awaited. She was last seen in the 2019 release, The Zoya Factor. She made a cameo appearance in Anil Kapoor and Anurag Kashyap’s AK vs AK, which released on Netflix in 2020.