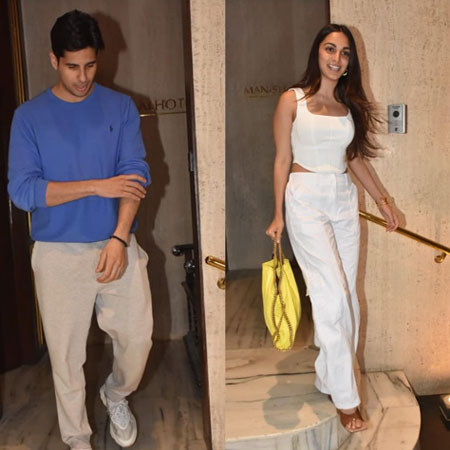 Siddharth Malhotra and Kiara Advani were clicked by the paparazzi outside fashion designer Manish Malhotra’s house.

The couple has been making public appearances together for quite some time now and now the rumors had it that the duo is getting married very soon.

Kiara and Sid were reportedly looking out for wedding venues in Chandigarh. Spotting the two outside the ace designer’s doorstep has added fuel to their relationship rumours.

The paparazzi took pictures of them outside Malhotra’s Mumbai home. Kiara wore a white coloured crop top with a pair of white pants. She also carried a yellow handbag and flashed her million-dollar smile for the paparazzi.

Meanwhile, Siddharth opted for a casual look as he wore a blue t-shirt with pair white sweatpants.

The rumoured lovebirds have not made any confirmation over the speculations. But recently, Malhotra in conversation with RJ Supriya from Radio Fever FM dropped some hint for the fans.

During the conversation, he was asked what is going to be the rumour that he would want to clarify, to which he responded saying: “That I am getting married this year.”

As per PinkVilla, Siddharth Malhotra’s well-wishers are considering it to be a hint.