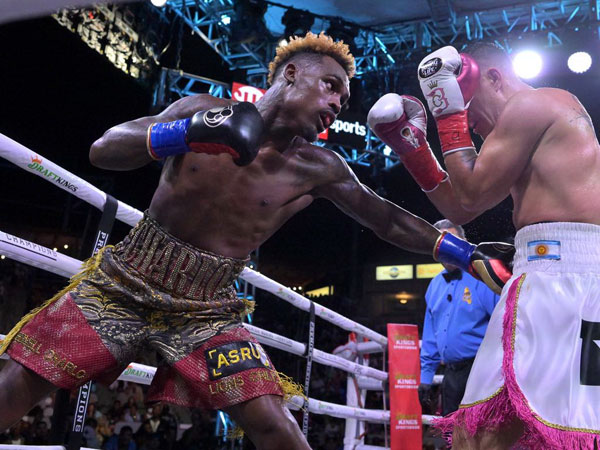 The matchup, which had been set for January 28 at Las Vegas, would have been the first time Charlo defended all four major sanctioning body world crowns after unifying them in May by knocking out Argentina’s Brian Castano.

Charlo broke his left hand in two places, between the pinkie and ring fingers and at the base of the thumb, on Tuesday after landing a punch in sparring at his gym in Houston.

The 32-year-old American visited two doctors and a hand specialist in Houston and his hand was placed in a cast, where it will stay for the next two months. Only then will Charlo begin rehabilitation of the injury, which he must complete before he can resume training for a fight.

“I was sparring and I threw this nice punch and as soon as it landed, I knew something was wrong,” Charlo said. “I felt my hand throbbing right away.

“I had two X-rays and an MRI to see what was wrong. It showed it was broken in two places. I hate this feeling. My hand will be in a cast for two months. I’m as disappointed as the fans, maybe more, because this was my first chance to defend the undisputed title.”

Charlo, 35-1-1 with 19 knockouts, spoke confidently about being able to handle Tszyu, 21-0 with 15 knockouts, even with the injury.

“The way I am, I would have beaten Tim Tszyu with one hand, but the doctors and the boxing commission won’t allow that,” Charlo said.

“It’s even more dangerous when a lion faces adversity and has to come back to defend the pride. I’ve been training since July, and I’ve been hitting harder than ever, and these are the things that happen when you push yourself to the limits.

“After my hand heals, I’m coming back stronger than ever to defend my legacy.”

The 154-pound battle remains among the most anticipated fights of 2023, whenever it might happen.

Tszyu, the son of former light welterweight world champion Kostya Tszyu, indicated he would fight a mandatory rival while waiting for Charlo to become healthy once more.

“I’m very disappointed,” Tszyu said. “I felt like the stars aligned for undisputed… but we move on. I’m ready to take on the next mandatory challenger. I’ll be back for Charlo once he is ready and healed.” AGENCIES