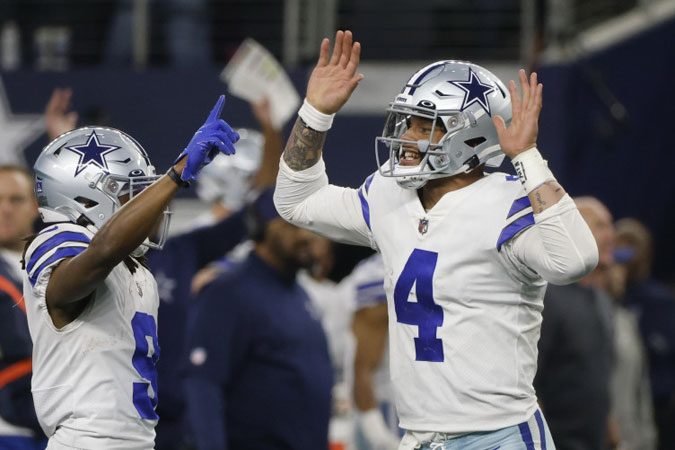 WASHINGTON: Dak Prescott threw for 347 yards and three touchdowns to spark the Dallas Cowboys over NFL-best Philadelphia 40-34 on Saturday, keeping the Eagles from clinching a top playoff seeding.

The Cowboys’ defensive unit forced four turnovers and seized command late in a deadlocked game to stun the visiting Eagles (13-2).

“This was a huge game, not only beating one of the best teams in the league, but the way we did it,” Prescott said. “Just being able to make some plays right there at the end, scoring a lot of points, the defense making stops. We can use this and continue to build.” The victory kept Dallas, 11-4 in the NFC East division title hunt and Minnesota, 12-3, moved closer in the fight for the NFC top seed and a first-round playoff bye. The Baltimore Ravens clinched a playoff berth on a day where most games were played in severely cold conditions, while the New York Giants missed a chance to clinch a post-season spot on a last-play loss at Minnesota.

Prescott completed 27 of 35 passes and kept his poise after having an early interception returned for a touchdown. “It was just about moving on,” said Prescott. “All I did is just keep my head down and keep playing. I focused in and we were able to come out with this one.”

In the last minutes, Dallas defender DaRon Bland intercepted a Gardner Minshew pass and Anthony Barr recovered a fumble by Philadelphia’s Miles Sanders to set up Brett Maher field goals of 48 and 26 yards for the decisive points. “They gave us chance after chance,” Prescott said. “With those four turnovers, they gave us short field position and we were able to capitalize on some. When they do that, we’re a tough team to beat.”

The Cowboys stopped Philadelphia’s final drive on downs at the Dallas 20 with 14 seconds remaining after a speech from linebacker Micah Parsons to secure the victory. “I said if we want to be a championship team, a championship defense, this is for our lives,” Parsons said. “In that last six minutes, we were able to get them stops and get the win.”

Buffalo clinched a third consecutive AFC East division title and stayed ahead of Kansas City in the fight for the AFC playoff top seeding with a 35-13 victory at Chicago. Josh Allen threw for 172 yards and two touchdowns, Devin Singletary ran for 106 yards and a touchdown and James Cook rushed for 99 yards and a touchdown for the Bills (12-3).

Kansas City (12-3) stayed on Buffalo’s heels with a 24-10 home triumph over Seattle. Patrick Mahomes threw for 224 yards and two touchdowns and ran for another touchdown for the Chiefs.

At Baltimore, Tyler Huntley capped a 13-play, 70-yard drive with a 6-yard touchdown pass and ran for a two-point conversion for the decisive points in the Ravens’ 17-9 victory over Atlanta. The Ravens (10-5) clinched a playoff berth when the New England Patriots lost to visiting Cincinnati 22-18. Cincinnati’s Joe Burrow completed 40-of-52 passes for 375 yards and three touchdowns as the Bengals (11-4) stayed ahead of the Ravens in the AFC North division.

Minnesota’s Kirk Cousins threw for 299 yards and three touchdowns and Greg Joseph kicked a career-longest 61-yard field goal on the final play to give the Vikings a 27-24 victory over the Giants. The Giants, 8-6-1, moved to the brink of clinching a playoff berth with Seattle’s loss at Kansas City and Detroit’s 37-23 defeat at Carolina. New York’s hopes were also aided by Washington’s 37-20 loss at San Francisco. Brock Purdy threw two touchdown passes to George Kittle for the 49ers. Tennessee’s playoff hopes suffered a blow with a 19-14 home loss to Houston (2-12-1). The Titans (7-8) had a fifth consecutive loss to slide level with Jacksonville for the AFC South lead.