‘Deal’ out of question

* PTI chief says party MNAs will appear before NA speaker tomorrow to confirm their resignations
* PPP, PML-N have no receipts of foreign funding while PTI has data of 40,000 donors 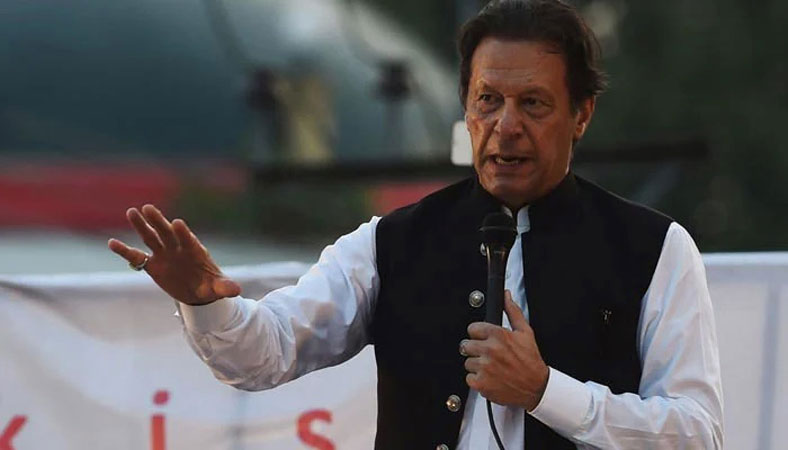 Former prime minister and Pakistan Tehreek-e-Insaf (PTI) Chairman Imran Khan on Saturday told journalists that he will not damage the public’s trust just for the sake of acquiring power again, as he also ruled out the possibility of making any compromises to retake power.

In an informal discussion with local journalists at his Zaman Park mansion in Lahore, Imran Khan predicted that elections will be held in March or April of the coming year. He said that they are making an alliance with Pakistan Muslim League-Q (PML-Q) because they have supported PTI. “We will also remain allies with the Q-League (Pakistan Muslim League-Quaid) as they have stood by us,” the PTI chief said as the political turmoil in Punjab persists. “I will not inflict pain on the masses for remaining in power. Once I form my government again, I will not compromise on anything,” the PTI chief said. He also added that PTI’s members of the National Assembly would appear before Speaker Raja Pervez Ashraf to confirm their resignations on Monday (December 26).

Criticizing the incumbent government, Imran said that Foreign Minister Bilawal Bhutto Zardari had undertaken more foreign tours in the few months he has had the post than the number of trips he made as prime minister. When he was told that Bilawal had already clarified that he pays for his own tickets and stay abroad, Imran rhetorically asked if he is paying for these trips himself, then are these his private tours?

Once again, taking aim at the former chief of army staff, General (Retired) Qamar Javed Bajwa, Imran said that in his last year in power, he learnt that Gen Bajwa was not serious about prosecuting the corrupt. “In the last year, we found out that Gen Bajwa did not want accountability,” Imran said. The former prime minister contended that Gen Bajwa had made a gross miscalculation in thinking that PTI’s star would subside.

But it never did. Instead, our popularity kept on rising (after being pushed out of power), he said. Imran continued that if there was a proper, supportive army chief, we would have cleaned out (the corrupt), he said. He further alleged that Gen (retired) Bajwa had a deal with Pakistan People’s Party (PPP) Co-Chairman Asif Ali Zardari and Sindh Chief Minister Murad Ali Shah. Imran said that when the PTI was in power, the National Accountability Bureau was under Gen (r) Bajwa’s control. “There is no rule of law. Only the powerful rule this country.” “We found out during the last year of my government’s tenure that Gen Bajwa does not want accountability to take place,” Imran said, adding that he would’ve “cleansed” the entire country of corruption had he had an “appropriate” army chief. The former prime minister said that the “regime change operation” was supposed to hurt the PTI but it instead ended up boosting the party’s popularity. “Gen Bajwa kept thinking that the rise of PTI will decrease but that did not happen.” He alleged that the Election Commission of Pakistan was under the control of the establishment.

Talking about allegations of foreign funding, Imran retorted that neither the PPP nor the Pakistan Muslim League-Nawaz (PML-N) has any receipts of their funding. “We have data of 40,000 donors,” he said, maintaining that the Supreme Court had directed the election commission of Pakistan (ECP) to jointly hear the case of foreign funding of all political parties, but the ECP did not do that. He went on to accuse the ECP of being controlled by the establishment. “Supreme Court said the foreign funding cases of all the political parties should be heard together,” he recalled.