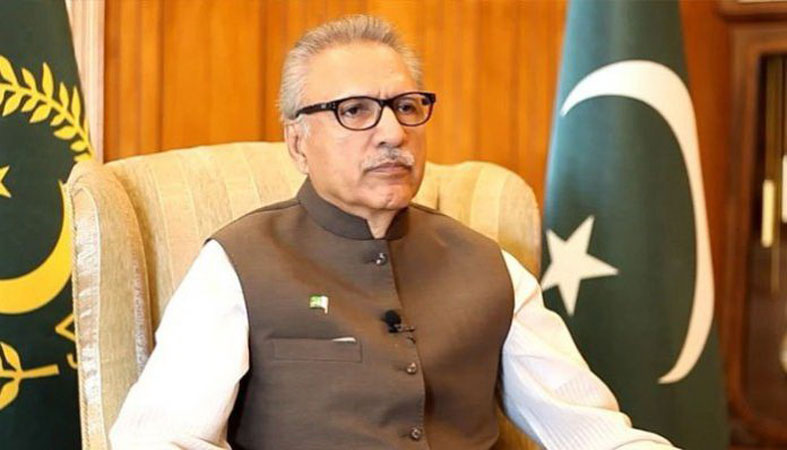 President Dr Arif Alvi in separate letters addressed to the Prime Minister and Chief Justice of Pakistan Saturday asked them to look into the issues raised by Murad Saeed to alleviate his grievances.

In his letters to Prime Minister Muhammad Shehbaz Sharif, and Chief Justice of the Supreme Court of Pakistan, Justice Umar Ata Bandial, the president referred to the serious allegations levelled by the parliamentarian, which inter alia included: fake, bogus, frivolous FIR was registered against him for the incident that occurred at Masjid-e-Nabvi, Madina Sharif, on May 1, 2022, despite the fact that he was in Pakistan.

“Multiple FIRs have been registered against him on the same charges all over Pakistan. The aforementioned actions are against the fundamental rights enshrined under Articles 9, 13 and 14 of the Constitution of Pakistan.”

The letter mentioned that Murad Saeed raised the issue of the deteriorating law and order situation in Malakand (Swat). Subsequently, he was threatened with dire consequences and was compelled to leave Swat, along with his family. The president pointed out that Article 15 of the Constitution of Pakistan provides that “every citizen shall have the right to remain in, and, subject to any reasonable restriction imposed by law in the public interest, enter and move freely throughout Pakistan and to reside and settle in any part thereof.”

Murad Saeed raised the issue that on August 18, 2022, the privacy of his home was violated, and despite his repeated requests and court’s order, FIR has not yet been registered by Islamabad Police. Moreover, he was followed and harassed with serious life threats.

The president pointed out that such alleged acts were in violation of Article 9 of the Constitution and the law. In April, during the premier’s visit to Saudi Arabia, a group of protesters loudly chanted slogans against the PM and his delegation as soon as they entered the mosque to pay their respects at the Roza-e-Rasool (PBUH). Upon the arrival of PM Shehbaz and his delegation at the mosque, the protesters started chanting slogans of “chor, chor (thieves)” when they saw the premier and harassed and raised objectionable slogans against Information Minister Marriyum Aurangzeb.

Following the incident, several FIRs were registered against PTI leaders – including the party’s chief, Imran Khan. Later, a court in Madinah sentenced three Pakistanis to eight years in prison. Meanwhile, another three Pakistani citizens were sentenced to six years in jail for creating chaos and violating the sanctity of the holy mosque.

In October, the Prime Minister and Crown Prince of Saudi Arabia Muhammad bin Salman (MBS) ordered releasing all Pakistani citizens, who had been imprisoned in the kingdom for rioting at Masjid-e-Nabawi (PBUH).

Meanwhile, President Alvi stressed the need for making concerted efforts to improve the accessibility and inclusion of persons with disabilities (PWDs) into the mainstream of society so as to make them equal, productive, and active citizens of the country. The president expressed these views during an interactive session with persons with disabilities organized by the World Health Organization (WHO).

While speaking on the occasion, the president underlined the need to enhance the inclusion of PWDs in all fields of life, besides providing them with education and employment opportunities in mainstream institutions. He said that persons with hearing, visual, physical, and mental disability could be imparted formal education in schools.

Dr. Alvi urged for bringing in attitudinal changes towards PWDs at individual and societal levels to make them feel more welcome in society. He said that globally the attitudes towards PWDs were changing and they were increasingly being facilitated and included in all streams of life, whereas Pakistan lagged behind in terms of the participation of PWDs in different activities. He said that PWDs needed to be given jobs as per their quota and PWDs with mild and severe forms of disability also needed to be accommodated as per their abilities and skills in different jobs.