* 'We wanted to release the film this Christmas…but there is a TWIST,' Kaif wrote with the poster on Instagram 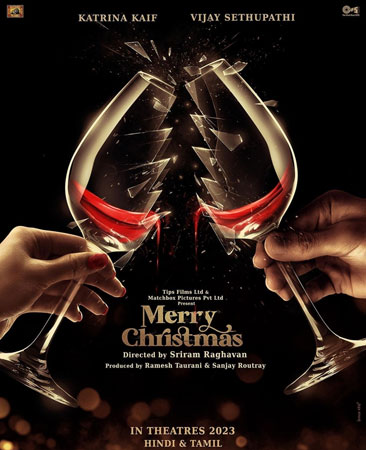 “We wanted to release the film this Christmas…but there is a TWIST,” Kaif wrote with the poster on the gram.

“See you in cinemas soon,” she added along with a Christmas tree sticker on the poster, which shows a man and a woman cheering with broken wine glasses, filled with blood, indicating the wrong happening in the festive mood.

The upcoming film is the first collaboration of Kaif with South Indian superstar Vijay Sethupathi and seasoned director Sriram Raghavan.

Raghavan is known for his work in the genre of neo-noir action thrillers including ‘Badlapur’, ‘Johnny Gaddaar’ and ‘Andhadhun’ among others and the upcoming film is expected to be the same.

‘Merry Christmas’ has been helmed by Sriram Raghavan who has also written the screenplay with Anukriti Panday. Apart from Kaif and Sethupathi, the film features Vinay Pathak and Sanjay Kapoor in pivotal roles.

The thriller flick will be released sometime in 2023 in Hindi and Tamil languages.

To note, Katrina Kaif was last seen in the supernatural comedy ‘Phone Bhoot’ earlier this year. The film was a Box Office failure and received mixed reviews from critics.

Apart from ‘Merry Christmas’, Kaif also has a hotly-anticipated threequel of the ‘Tiger’ franchise from YRFs spy-universe in the kitty.