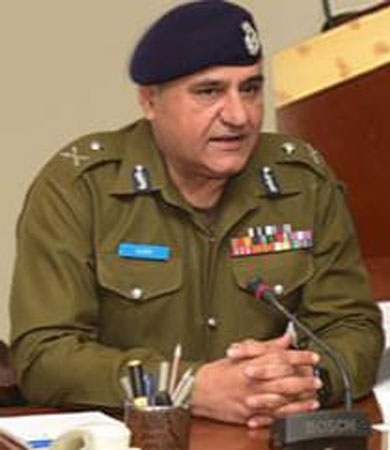 Inspector General Police Punjab, Muhammad Amir Zulfiqar Khan has said that eliminating crimes while ensuring the safety of citizens’ lives and property is my top priority, in which any omission will be intolerable. IG Punjab expressed concern over the crime situation across the province and said that the report of all good will no longer work, practical steps have to be taken and crime control will be the only measure to evaluate the performance of the officers. He said that my policy is “You Work you Stay” so the officer who does good work will stay in the post.

IG Punjab ordered the officers to perform their duties according to the constitution and law. IG Punjab said that there will be no compromise on the discipline of the force, there should be a clear difference in the Punjab Police. Amir Zulfiqar Khan, IG Punjab, while giving the task of monitoring the performance of the officers to the Special Branch, directed that the report should be submitted to him on daily basis. IG Punjab directed that foolproof security should be provided for Christmas and Quaid-e-Azam Day celebrations across the province. Amir Zulfiqar Khan directed that in view of the recent wave of terrorism, the security of sensitive and public places should be re-evaluated across the province. Moreover, in view of the recent incidents, CTD Punjab should take special measures to wipe out the terrorists completely. Make sure. IG Punjab directed that special squads of police teams should be formed to maintain the atmosphere of law and order on New Year’s Night while ensuring strict legal action under zero tolerance against lawbreakers involved in aerial firing, one -wheeling and rioting. He issued these instructions to the officers while presiding over his first RPOs conference at the Central Police Office today. IG Aamir Zulfiqar Khan informed the officers about his policy and priorities.

During the conference, IG Punjab was told that 28,000 officers and personnel will perform security duties on the Quaid-e-Azam Day and Christmas celebrations across the province, while more than 6,000 officers and officials will perform duties in the provincial capital, Lahore. IG Punjab directed that the senior officers should go out in the field themselves and review the security arrangements of the sensitive places of worship. IG Punjab directed that additional personnel should be deployed and special measures must be taken in Murree in view of the extra rush of tourists during the snowfall season. IG Punjab directed RPOs, DPOs and field officers to leave their offices and make surprise visits to police stations. He said that the welfare of the force is the first priority, the field officers should hold regularly hold Darbar so that all possible relief can be given to the force. Additional IG Operations, Additional IG CTD, Additional IG Special Branch, officers posted in Central Police Office, heads of all units, Police officers of Lahore including CCPO Lahore were present in the conference while RPOs, CPOs, DPOs participated in the conference through video link.