The lead singer of electronic dance group Faithless, Maxi Jazz, has died aged 65. In a tribute to the musician, whose real name was Maxwell Fraser, on social media, Faithless bandmates Sister Bliss and Rollo wrote: ‘We are heartbroken to say Maxi Jazz died peacefully at his home in South London last night.’ Fraser shared a video just four weeks ago on social media playing his guitar, revealing he was rehearsing new music. ‘New songs,’ he wrote. ‘Watch out world.’ Back in March, he revealed he was battling ‘health issues that had been impairing my ability to perform’. ‘I thought I might be on top of things but sadly not… I’ll let you know when I’ve regained sufficient oomph,’ he wrote on Instagram, adding that he had to cancel gigs. Faithless is best known for the 1995 hit Insomnia which topped the UK dance charts and peaked at number three in the UK chart when it was re-released a year later. The group wrote a number of other hit tracks together including We Come 1. ‘He was a man who changed our lives in so many ways. He gave proper meaning and message to our music,’ the band’s tribute continued.

‘He was also a lovely human being with time for everyone and a wisdom that was both profound and accessible. It was an honour and, of course, a true pleasure to work with him. ‘He was a brilliant lyricist, a DJ, a Buddhist, a magnificent stage presence, car lover, endless talker, beautiful person, moral compass and genius.

‘Sending love to all of you who shared our musical journey. Look after each other y’hear.’ Maxi was a lifelong supporter of Crystal Palace FC and became an associate director of the football club in 2012. 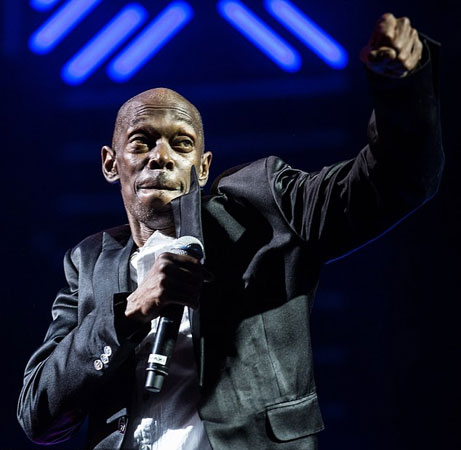 In tribute to their late boss, the team will walk on to Faithless at their Boxing Day match against Fulham at Selhurst Park.

The club tweeted a tribute to him tonight, saying: ‘We are mourning the loss of legendary musician Maxi Jazz, who has passed away at the age of 65.

‘The team will walk out to Faithless on Boxing Day in tribute.’

Speaking to the Guardian in 2020 about the enduring popularity of the band’s greatest hit, Insomnia, Jazz explained that the lyrics came to him ‘from personal experience’. ‘I didn’t suffer from insomnia, but I’d just had an abscess on my tooth. It was so painful it would keep me awake. He added that the lines about having no electricity and reaching for the pen in the darkness also came from his ‘real life’. ‘I had an electricity meter and when the money ran out you’d get six or seven pounds of credit and then – ‘Boom!’ – the lights would go out. So I used to write by candlelight.’ Faithless formed produced seven studio albums, with their most recent release, All Blessed, coming out in 2020. They also released a number of compilation albums and have headlined some of the biggest festivals in the world, including on Glastonbury’s Pyramid stage in 2002. The group were nominated for the Brit Award for best British dance act in 1999 and 2002. Born in Brixton, Jazz also fronted a band of musicians named Maxi Jazz & The E-Type Boys and released music with the group Soul Food Cafe. Reggae band UB40 remembered Jazz as a ‘lovely guy’ as they recalled touring with him in 2017 with his band Maxi Jazz & The E-Type Boys. Radio DJ MistaJam, whose real name is Peter Dalton, recalled meeting Jazz and coming away feeling like he was the ‘kindest man with such an aura about him’. He added in his tribute on Twitter: ‘His words and performances touched so many of us and he’ll be sorely missed. Love to @thesisterbliss and the whole @faithless family. Rest in Power Maxi Jazz!’