PA calls on Alvi to act against Baligh 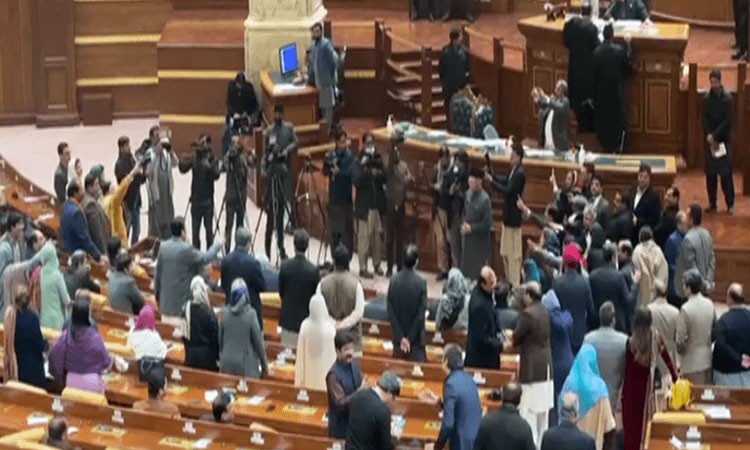 The Punjab Assembly on Friday passed a resolution, deploring Governor Baligh-ur-Rehman’s “illegal” move to remove Parvez Elahi as the chief minister. Pakistan Tehreek-e-Insaf’s (PTI) MPA Mian Aslam Iqbal moved the resolution, calling on President Arif Alvi to take action against the province’s governor. The resolution mentioned that the “imported government” in the centre has “attacked” Punjab and an attempt is also being made to destabilise the province. “People, who sold their conscience, have initiated an undemocratic invasion of the house and tried to destabilise the government,” the resolution mentioned. It also mentioned that the governor exceeded his powers when he issued the notification for the chief minister’s removal and also “disrespected” the Punjab Assembly. “The president should take notice of this shameful move. The president should also initiate proceedings to remove the governor from his office,” the resolution mentioned, as the reassured its “confidence” in CM Elahi.

In his address to the house, the chief minister said that no matter what his political enemies attempted to do, his government would continue to rule in Punjab. “We do not seek anyone’s help except for Allah and Prophet Muhammad (PBUH). We will continue our work and I assure all of you today, that even our generations will work for the religion.” In a sweeping statement against PTI Chairman Imran Khan, Pakistan Muslim League-Nawaz (PML-N) leader Rana Mashood questioned: “Today is December 23, why aren’t you dissolving the assemblies?” Speaking to media persons outside the Punjab Assembly, Mashood berated Khan and said that the ongoing terrorism in Khyber Pakhtunkhwa is because of the PTI chief. “Pakistan needs to get rid of this mess created by Khan,” he said, adding that the opposition has boycotted the assembly proceeding as “we believe session shouldn’t be called until the court’s decision is announced”.