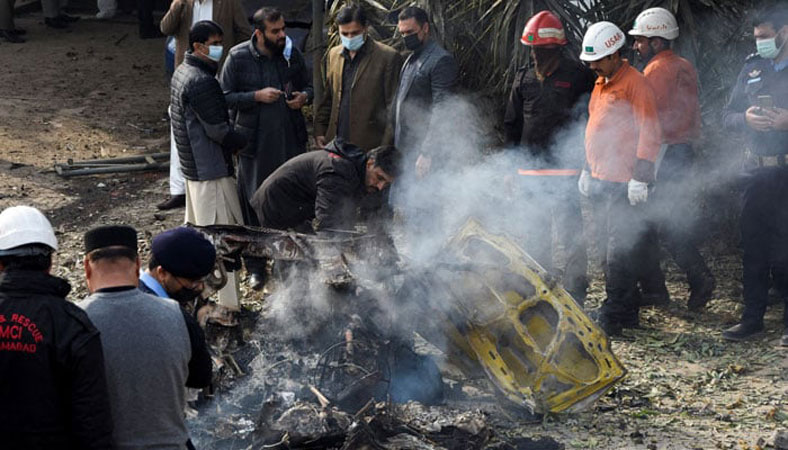 A police official embraced martyrdom, and eight others, including four civilians, received injuries after a suicide bomber reportedly blew himself up in the I-10/4 Sector on Friday.

The bomb disposal squad and other rescue teams rushed to the spot, cordoned off the area and initiated a probe into the incident.

A police spokesman said that ICT personnel stopped a suspicious vehicle during checking near Street 31 of I-10/4 Sector. “As the vehicle stopped, the suicide bomber exploded himself,” he added.

He said the police were on alert as it had a tip-off that some anti-state elements could carry out subversive activities to achieve their nefarious designs. Talking to the media, Deputy Inspector General of Islamabad Police (Operations) Sohail Zafar Chattha said the timely and effective action of police officials did avert the federal capital from an eventual disaster. He said that Eagle Squad intercepted the suspicious vehicle that was exploded by an alleged bomber, who died on the spot. The DIG said as per the initial reports, two persons including a woman were seated in the vehicle. He said all the injured had been shifted to Pakistan Institute of Medical Sciences (PIMS) for medical care.

According to the hospital sources, the martyred police official had been identified as Head Constable Adeel Hussain, while injured were identified as Muhammad Yusuf, Mehboob, Naveed, Hanif, Inaam, Raza Hussain, Muhammad Ashir and Usman. Body parts of the suicide bomber and other evidence had been collected from the incident place to advance the probe. Following the incident, the police have stepped up security arrangements across the federal capital to avoid any untoward incident. Issuing the ‘red alert’ in the capital, Inspector General of Police Dr Akbar Nasir Khan had directed for a crackdown against vehicles plying without registration numbers and unauthorized number plates. “There will be no permission to carry any weapon,” he warned, advising motorists to keep documents of their vehicles and identity cards with them to avoid any inconvenience.

He asked landlords to register their tenants with respective police stations without any delay in line with foolproof security arrangements being made to tackle anti-social elements.

In the backdrop of a suicide bomb attack the District Administration Islamabad Capital Territory (ICT) has imposed section 144 in the Federal Capital for a period of two weeks, with immediate, thus prohibited all kinds of corner meetings, jalsa, public gatherings and congregation in the Federal Capital, especially in the wake of upcoming local government elections.

Meanwhile, Prime Minister Shehbaz Sharif strongly condemned the suicide blast in Islamabad’s Sector I-10/4, saying that the whole nation stood by security forces for the elimination of terrorism. The prime minister paid tributes to Head Constable Adeel Hussain, who was martyred in the terror incident. “The police personnel intercepted the terrorists by rendering sacrifices. The nation salutes their brave soldiers,” he remarked. He said the people of Pakistan would continue struggling till the elimination of terrorism.

Foreign Minister Bilawal Bhutto Zardari also condemned the suicide bomb blast Friday morning and paid tremendous tribute to the Islamabad police. He expressed his sorrow and grief over the martyrdom of a police cop and said that Islamabad police performed their duty without any fear.

Minister for Information and Broadcasting Marriyum Aurangzeb strongly condemned the incident of terrorism and paid a rich tribute to the ICT Police and the Eagle Squad for timely action and averting a major disaster.

Federal Minister for Climate Change Senator Sherry Rehman also condemned the suicide blast in Sector I-10/4 of the federal capital.

She expressed solidarity with the family members of Shaheed Head Constable Adeel Hussain who embraced martyrdom in a vehicle laden with improvised explosives.

Speaker National Assembly Raja Pervaiz Ashraf and Deputy Speaker Zahid Akram Durrani also condemned the incident, expressed sympathies with the families of the victims and prayed for early recovery of the injured.

Senate Chairman Muhammad Sadiq Sanjrani strongly condemned the suicide blast here in sector I-10, and expressed sorrow over the loss of precious life in the attack that also left several injured. He expressed condolences to the bereaved family of the martyred police officer and directed the concerned to ensure the best possible medical facilities to the personnel injured in the blast.

Former president Asif Ali Zardari also condemned the bomb blast in Islamabad and expressed his grief over the martyrdom of the policeman in the blast and said that the brave policemen had foiled nefarious designs of terrorists.