No Hurts but Eagles aiming for top spot at Cowboys 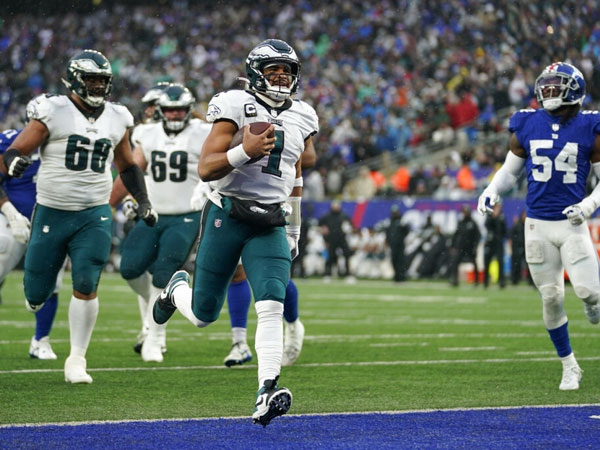 MIAMI: The Philadelphia Eagles will be without their starting quarterback Jalen Hurts for Saturday’s trip to the Dallas Cowboys where they could secure the top seed in the NFC. Hurts has been ruled out with a shoulder injury and the Eagles are confident he should be ready to return for the playoffs. In the meantime, they hope that backup Gardner Minshew can help them secure the NFC East title and the number one overall top seed which brings with it home-field advantage in the post-season. The 26-year-old Minshew has started 22 regular season games in his career, the bulk of them during his time with the Jacksonville Jaguars and Eagles coach Nick Sirianni is confident he will be up to the task. “Gardner will be our guy, and Gardner will be ready,” Sirianni said.

“Gardner worked his butt off for this opportunity against a really good football team and had a great practice (on Wednesday). A lot of energy out there. He’s ready to go.” Hurts has enjoyed an excellent season for the Eagles with his average 8.2 yards per pass attempt placing him second in the league and helping the Eagles to a league-best 13-1 record. Minshew brings less mobility and rushing ability than Hurts and that is likely to lead to some changes in approach from the Eagles. But having had to be patient as he waited for his opportunity the quarterback isn’t fazed by the chance awaiting him.

“I’m going to do something I’ve done my whole life, play football and I’m going to do my part,” Minshew said. “Just be me and play my game. I’m looking forward to it.”

The Cowboys (10-4) suffered a surprise loss to the Jaguars last week, ending a five game winning streak, but the visit of their divisional rivals offers them a chance to answer some of their doubters ahead of their post-season push. Quarterback Dak Prescott has struggled with interceptions in recent weeks, none more significant than the tipped pass against Jacksonville that led to the game-winning touchdown in overtime. Prescott has thrown ten interceptions in the eight weeks since he returned from a thumb injury but coach Mike McCarthy isn’t overly concerned by that statistic and doesn’t want his quarterback to play too safe. Since Prescott returned, the Cowboys lead the NFL in points scored, third-down conversions and yards. “Most importantly — he needs to keep firing. He needs to keep going. So let’s make that clear. Because we’re not slowing down,” he said.

The Eagles beat the Cowboys 26-17 when they met in Philadelphia in week 6. The Cincinnati Bengals (10-4) will look to extend their winning streak to seven games when they take on the New England Patriots (7-7). Victory for the Bengals will secure a return to the playoffs for last season’s Super Bowl runners-up. The Patriots had won five in six to get in contention for the post-season themselves but a costly error on a bizarre lateral play in the final stages saw them suffer a morale-sapping defeat to the Las Vegas Raiders last week. While that unexpected move was costly for the Patriots, Bengals quarterback Joe Burrow says they need to be alert for the surprise plays from Bill Belichick’s team that do work. “They’re going to have a good plan. You see it every week and on film. They’ll have a plan for certain guys. They’ll have a third-down plan that you probably haven’t seen. They’ll have a red-zone plan you haven’t seen, so you’ll have to make adjustments,” he said. On Sunday, the Miami Dolphins look to get their playoff ambitions back on track when they host the Green Bay Packers — themselves still in with a slight chance of making the post-season.

The Dolphins have lost their last three games, all of them on the road and will want to make the most of being back in South Florida.

“We love our home venue, but it’s not exactly like, ‘Oh, finally. We’re home.’ It’s more that we need another opportunity to play football because it’s a bad taste that you want to try to get rid of,” said head coach Mike McDaniel.