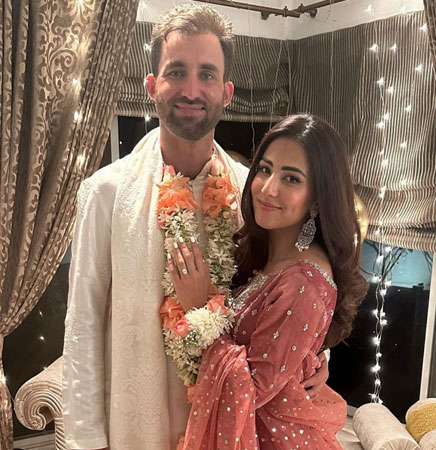 Famed actor Ushna Shah announced her engagement to golf player Hamza Amin by sharing a picture on the social media application Instagram. Ushna Shah and Hamza Amin shared picture of the two on their respective profile. The image showed them smiling together at the camera. Ushna Shah said Hamza Amin is her missing puzzle piece. The golf player said his heart will be the actor’s shelter and his arms will be her home. On the professional front, her portrayal of Ayesha Basit Khan, the wife of protagonist Basit Salman Khan, in the recently concluded superhit ARY Digital drama “Habs” was praised in particular. The cast also featured Ayesha Omar, Dania Enwer, Janice Tessa, Saba Faisal, Hina Rizvi, Isra Ghazal, Javed Sheikh, Imran Aslam and others. Aliya Makdoom wrote and Mushaddiq Malek directed the show. Ushna Shah has cemented her name with her captivating performances in her serials. The actor can play the roles of both protagonist and antagonist to perfection. She has starred in several superhit dramas with ‘Ab Kar Meri Rafugari,’ ‘Lashkara,’ ‘Balaa,’ ‘Cheekh,’ ‘Help Me Durdana,’ ‘Bewafa’ and “Habs” being some of them.