Pakistanis far ahead of leaders: experts 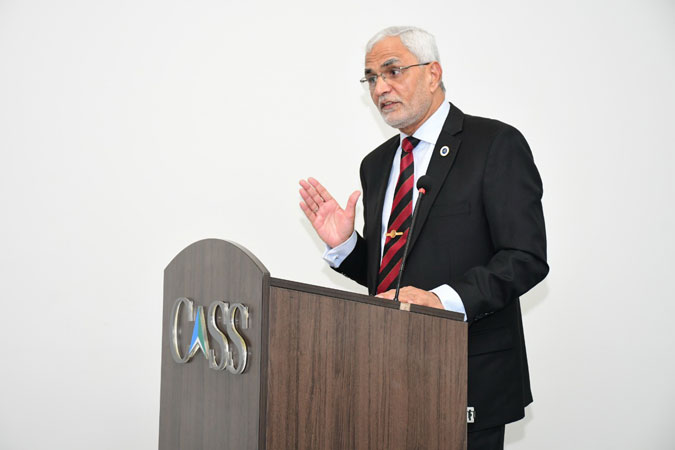 Experts at a special seminar on Quaid-e-Azam Muhammad Ali Jinnah’s leadership and thinking Thursday said the people of Pakistan were far ahead of their leaders and waiting for someone bearing Jinnah’s vision and integrity.

The seminar ‘Muhammad Ali Jinnah: His Vision and Struggle’ was organised by the Centre for Aerospace & Security Studies (CASS), said a news release issued here.

Javed Jabbar, in his keynote address, shared that Jinnah’s vision of Pakistan evolved decades before the word ‘Pakistan’ was even conceived or the freedom movement even began. “In fact, his concept of what ‘Muslims’ were or should be, did not begin with the Lahore Resolution.”

He observed that one only needed to study Jinnah’s speeches of over 42 years to see how futuristic he was; his acute clarity of thought, desire for change, combined with willingness to be pragmatic rather than obstinate.

He argued that one major example of Jinnah’s vision could be seen from the fact that he (Jinnah) stressed on the importance of compulsory elementary education for all children in the subcontinent at a time when no one was interested in such a model.

The keynote speaker further shared that more than equality, equity was the cardinal principle of Quaid’s political life, vision and thinking, be it political, gender or institutional equity. On the current and future trajectory, Jabbar strongly urged that the political equity for Pakistan could only come through electoral reforms.

He also called for direct political representation of women and the need to practice austerity, following Jinnah’s model, in the current economic crisis.

Prof. Dr Riaz Ahmad, while giving an account of Jinnah’s struggle, political journey and case for Pakistan, informed the audience that Quaid-i-Azam learnt politics by spending hours and hours in parliament, observing how politicians argued in parliamentary debates.

According to the speaker, Jinnah as ‘Quaid’ was exceptional, but the legal acumen, high sense of integrity, responsibility and sound character displayed by the young Jinnah, was also extraordinary. Quoting Jinnah, Dr Riaz Ahmad said, “Pakistan not only means freedom and independence, it is a Muslim ideology which has to be safeguarded.”

“Pakistan is Jinnah’s precious gift and treasure to us which we must protect,” he reminded.

Prof. Dr Iqbal Chawla lamented that as a state, Pakistan had failed to safeguard its hard-won freedoms and taken an endless series of wrong turns in every sphere of life and thus totally shunned the spirit, which led to the creation of Pakistan. He pointed to several internal and external social and geopolitical challenges which the country was currently facing.

Dr Chawla was of the view that these problems were “primarily of our own making and led to strengthening of centrifugal forces reinforced by powerful and resourceful international state-led internal mafias in all sectors of life.”

Jinnah, he said, wanted Pakistan to be inclusive, with an impartial government, complete religious freedom, rule of law and equality for all.

Delivering his concluding remarks and vote of thanks, CASS President Air Marshal (Retd) Farhat Hussain Khan thanked the speakers and acknowledged that Quaid-i-Azam, the father of the nation, was the most charismatic leader, and Pakistan was fortunate to have him as a leader. However, he lamented that the Pakistani nation had diverted from his (Jinnah) authentic vision.

“By following his governance guidelines, we can once again build and strengthen our institutions,” he stressed, and announced that the CASS would commemorate Iqbal’s and Jinnah’s lives in special events every year.

The seminar was followed by the inauguration of the ‘Jinnah Corner’ in the CASS Library containing important works on Muhammad Ali Jinnah, attended by a large number of retired and serving Air Force officers, diplomats, students, and persons from academia. CASS Research Assistant Shaza Arif delivered the introductory remarks and moderated the proceedings.