The ‘circus’ goes on

* Notification reads since CM has refrained from obtaining vote of confidence at the appointed day and time, therefore he ceases to hold office
* Elahi to continue to hold office until new CM is elected 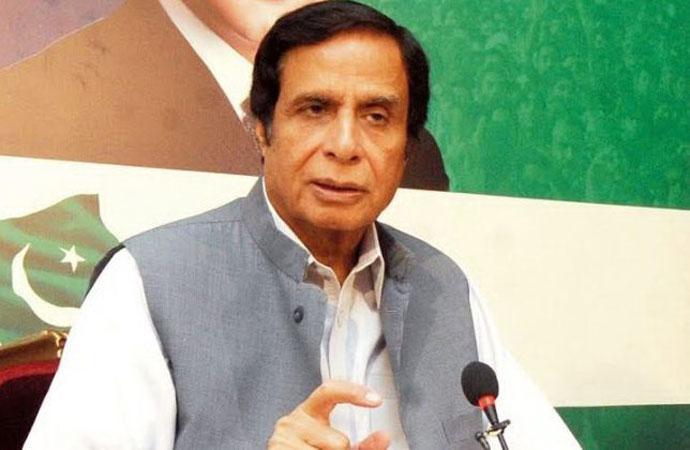 Punjab Governor Balighur Rehman denotified Chief Minister Parvez Elahi in the wee hours on Friday, citing failure to take the vote of confidence from the Punjab assembly as the reason behind his action.

“Since CM has refrained from obtaining vote of confidence at the appointed day and time therefore he ceases to hold office. Orders issued this evening,” he wrote on his official Twitter handle, sharing a copy of the notification.

“Consequent to the facts that Ch Pervaiz Elahi, CM Punjab, refrained from obtaining vote of confidence at 1600 hrs yesterday, in line with an Order under Article 130 (7) of the Constitution of Islamic Republic of Pakistan, issued under my hand on 19th December 2022, in line with Rule 22 (7) of the Rules of Procedures of Provincial Assembly of Punjab, 1997, and that he still has not done so ever after the lapse of another twenty four hours, I am satisfied that he does not command the confidence of the majority of the members of the Punjab Assembly and therefore ceases to hold his office with immediate effect,” the notification stated. According to the notification, the provincial cabinet stands dissolved and the Pervez Elahi is asked to continue as chief minister until his successor enters office. 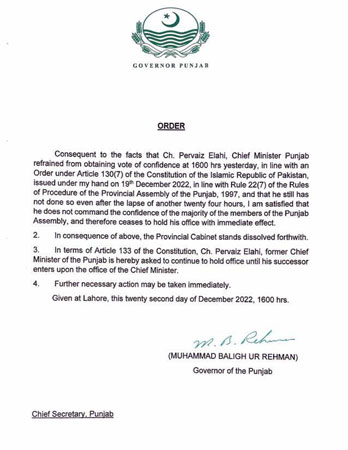 “In terms of Article 133 of the Constitution, Ch. Pervaiz Elahi, former Chief Minister of the Punjab, is hereby asked to continue to hold official until his successor enters upon the office of the Chief Minister,” it added. The Punjab governor had earlier asked the chief minister to take vote of confidence from the provincial assembly.

Rehman – belonging to the Pakistan Muslim League-Nawaz (PML-N) – had summoned a session on Wednesday at 4 pm for a vote of confidence pertaining to Chief Minister Parvez Elahi. But defying the directives, the speaker – a PTI member – had termed the order against the Constitution and adjourned an ongoing session till Friday. The governor issued the directives under Article 130’s section 7, stating that it is the speaker’s responsibility to defend the Constitution and uphold the law. Earlier this week, Pakistan Muslim League-Nawaz (PML-N) and the Pakistan People’s Party (PPP) submitted a no-confidence motion against Elahi in the Punjab Assembly, after PTI Chairman Imran Khan announced that the provincial assemblies of Punjab and Khyber Pakhtunkhwa will be dissolved on December 23. Reacting to the governor’s order to call the sesssion for vote of confidence, Sibtain Khan had said that it is not a governor’s problem to give or not give a ministry to someone.