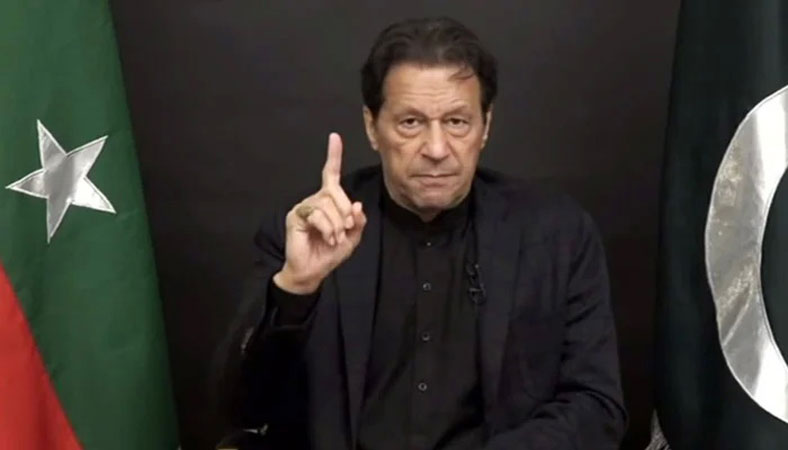 Pakistan Tehreek-e-Insaf (PTI) Chairman Imran Khan on Thursday reiterated his call for holding early elections, urging the “establishment” and “judiciary” to play their role to avoid further economic destruction and political instability in the country.

“We are afraid that everything will get out of hand if [general] elections are not held soon,” he said while addressing his party’s parliamentarians, supporters and workers who had gathered outside the Punjab Governor House in Lahore to “block” Balighur Rehman from taking any “unconstitutional” decision of de-notifying Chief Minister Chaudhry Parvez Elahi. “Today I want to talk to the nation about the situation in Punjab,” he said.

“There is a strange environment. Initially, the PML-N was challenging us to dissolve assemblies, saying that they were ready for elections. But when we did that, a vote of confidence and no-trust motions were moved in the Punjab Assembly.”

The PTI chief explained that he wanted to dissolve his provincial assembles “because we fear that if snap polls are not held, the country will slip out of our hands”. Imran claimed that the reason behind “this joke in Punjab” was one: “They [the coalition government] are running away from elections. The convict sitting abroad and Zardari are scared. They have a one-point agenda to hide their theft and they will hurt the country in the process. They won’t think about Pakistan once. All they want is an NRO 2,” he alleged.

Imran Khan also reminded his supporters about the PTI’s winning by-election despite alleged rigging. He added that his assassination was decided as a result of his party’s victorious stride. The PTI chief said that even though his party has governments in two provinces and rules over 66% of the country, it has decided the dissolution of the Punjab and Khyber Pakhtunkhwa assemblies. “This is everyone’s battle, but not of those whose money is lying abroad,” Khan said, pointing at the Pakistan Democratic Movement-led government in the Centre. He added that the nation rejected the “gang of thieves”. “I want to remind the nation that his toppled PTI government took the country towards economic progress,” the former prime minister said. He went on to say that one man’s decision toppled his government, deeming it “cruelty”. “One man has enmity [towards PTI]. He decided to end the party. He decided to end Imran Khan,” Khan said without naming the person he was referring to. He recalled that since his ouster, the PTI and its members have been oppressed only because of “one man”. “What was our fault? Only that we refused to accept the thieves you imposed on us?”

Initially, Imran pointed out, it was only the PTI. “But then the country decided to join us. This man saw that the nation was with us […]. “Never did the nation come out in huge numbers, that too again and again. It was giving one message that the imported government was unacceptable,” he said. However, the ex-premier contended that “one man” was still apt at “destroying” his party and went to all extents. “When they saw that nothing was working out, they decided to kill me and remove me from the way.” He then asked: “This one man, what more will you do to force us to accept the imported government? “Videos and audios are being leaked on social media […] tell me, how low will we fall,” Imran asked, claiming that all of these things were being done to blackmail his party. Khan said that he had never seen the nation go into a dark time in his 70 years of life. “Our country is getting stuck in quicksand.” He said that he is addressing those Pakistanis who have not laundered their money abroad rather than those who have looted the country. Concluding his address, Imran asked the institutions, “all those that have a stake in the country”, if they were not worried about where Pakistan was heading and its future. “Are you not worried today that our country is heading towards a point where there will be no coming back,” he asked and then stressed that snap polls was the only solution.