Pakistan to work with US on regional peace 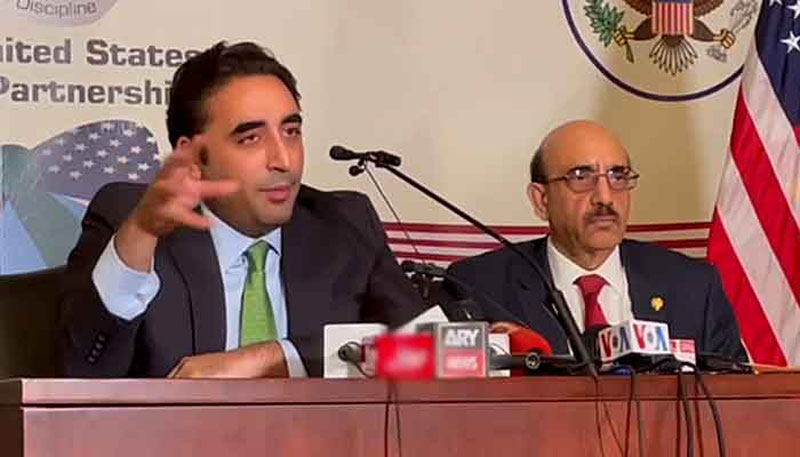 Foreign Minister Bilawal Bhutto Zardari has said that Pakistan would continue working with the United States to promote peace and stability in the region.

The foreign minister expressed these views in a meeting with U.S. Deputy Secretary of State Wendy Sherman.

In a tweet, Bilawal mentioned that he had a productive meeting with Wendy Sherman, where he appreciated the role of the U.S. in flood relief, rehabilitation and reconstruction.

“Pakistan and the United States will continue to work together to further enhance and diversify bilateral relations, and promote peace and stability in the region,” he said. In a meeting with Senator Chris Van Hollen, the foreign minister thanked him for his steadfast support for Pakistan. The two sides discussed US Congress’ important role in strengthening Pak-U.S. cooperation in flood relief, rehabilitation and reconstruction. Meanwhile, Bilawal Bhutto said the Afghan Taliban have been told that the banned TTP is Pakistan’s redline and Islamabad’s relationship with Kabul will be affected if the terrorist outfit is not controlled.

Speaking to the media at the Pakistan Embassy in Washington, Bilawal Bhutto said, “We will not ignore if we found out that Taliban are not stopping TTP.” The rising number of terror incidents has put the security apparatus in the country on alert as the Bannu hostage crisis sent shockwaves across the country. Over 120 policemen were martyred and over 125 others were wounded in different kinds of attacks on the police force in Khyber Pakhtunkhwa during the current year. The top Pakistani diplomat is in the US where he held meetings during which he met with the UN chief, chaired a G77 meeting and spoke at Atlantic Council in Washington. Expressing his concern over the deteriorating law and order situation in the country due to rising TTP attacks from Afghan soil, Bilawal said if the Taliban carry out operations against the extremists, Pakistan will provide help if needed.

He said that there was no new agreement on cooperation with the US for anti-terrorism. “We urge to release frozen funds for the Afghan people not for the Taliban. They [Taliban] promised with US and the world to take action against extremist groups,” said Bilawal.