Writ of state to be established at all costs, says PM 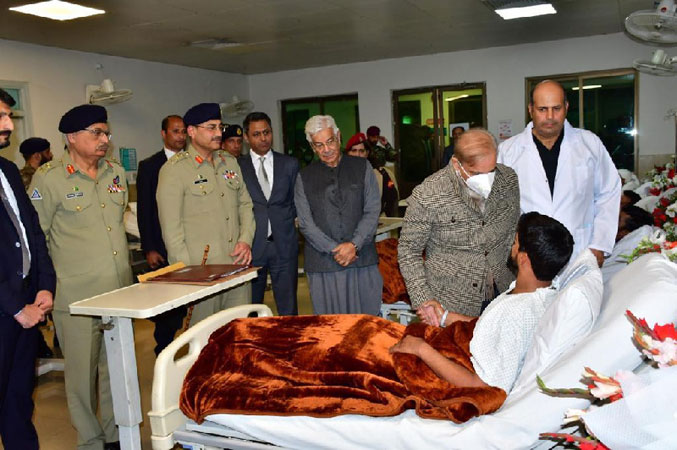 Prime Minister Shehbaz Sharif on Thursday said the government would establish writ of the state at any costs, and no one would be allowed to derail the hard-earned gains of war on terrorism.

“Writ of the state will be established at all costs and no one will be allowed to derail the hard-earned gains of war on terror achieved through unparalleled sacrifices of the nation and valiant armed forces,” the prime minister said talking to the officers and soldiers at CMH Rawalpindi who got injured during the CTD complex Bannu operation.

The prime minister met the injured officers and soldiers and paid tribute to the courage and valour of the troops who cleared the Counter Terrorism Department (CTD) complex in Bannu. He said the martyrs and their families had rendered supreme sacrifices for ensuring the safety and security of the people of Pakistan.

“We are determined to fight out terrorism in its all forms and manifestations, and break the nexus between terrorists and their supporters and sympathisers till achieving a peaceful and stable environment,” said the premier.

The security forces on Wednesday regained full control of the CTD compound in Bannu, rescuing all the hostages in the facility as well as killing and capturing the terrorists holding them, officials in the town said. Meanwhile, the prime minister directed the authorities concerned to complete the solarisation of the government buildings before the onset of summer season.

Calling for the promotion of solar energy by the private sector, he instructed all the departments to expedite the process of transparent bidding for establishment of solar power plants. The solarisation of the government buildings would also reduce the electricity bills as it was a mode of clean and cheap electricity.

The prime minister was briefed that the federal cabinet had already approved a framework for the generation of electricity through solar energy instead of the costly imported fuels. Moreover, the National Electric Power Regulatory Authority (NEPRA) would define the tariff for mega solar projects by the end of current month which would follow the bidding from the investors. It was told that three solar power plants were being planned including a 1200MW project in Layyah, and of two 600MW each in Muzaffargarh and Trimmu. The prime minister was also briefed on the vision of converting countrywide buildings to solar energy. It was told that an expert consultant had been hired for the solarisation of government buildings. Shehbaz said a centralised and transparent procurement should be opted by all the federal departments.