‘Whitney Houston: I Wanna Dance with Somebody’ — a lavish, all-stops-out biopic

* As Houston, the British actress Naomi Ackie is far from the singer's physical double, yet she nails the hard part: channelling her incandescence 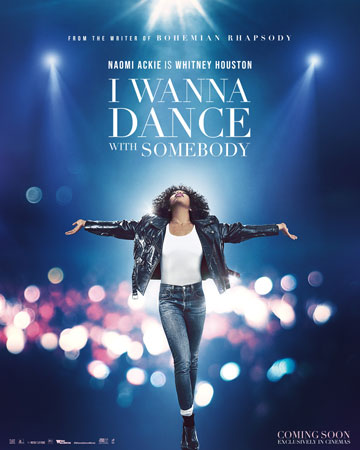 Hollywood pop-music biopics tend to be about artists who go back a long way. “Bohemian Rhapsody” felt rooted in a fresher, less done-to-death-by-biopics era – though when the Freddie Mercury drama came out, its title song was already 43 years old. “I Wanna Dance with Somebody,” which tells the exultant and tragic story of Whitney Houston, feels different. Houston’s first album was released in 1985 and maybe because her triumphs and travails were chronicled, right as they were happening, by a newly emerging entertainment-media-gossip complex, the film feels like it’s telling a story that never went away. Yet as you watch, you may realize how much there is to the story you didn’t know, and how transporting it is. “I Wanna Dance with Somebody” is the kind of lavishly impassioned all-stops-out biopic you either give into or you don’t – and if you do, you may find yourself getting so emotional, baby.

As Houston, the British actor Naomi Ackie is far from the singer’s physical double, yet she nails the hard part: channelling her incandescence. She shows you the freedom that made Houston tick and the self-doubt that ate away at her, until she fell from the mountaintop she’d scaled. Ackie is also a veritable artist of lip-syncing, bringing to life the drama of Houston’s songs, and doing it with a mischievous sparkle that was the essence of Whitney. The director, Kasi Lemmons, working from a screenplay by Anthony McCarten, creates a portrait of Houston’s glories and demons that’s bracingly authentic, from her roots in the gospel church, where she can’t resist adding curlicues to the melodies, to the drugs she starts doing casually with her brothers in their middle-class community of East Orange, NJ, to her quick rise to fame to her love affair with Robyn Crawford, a relationship that Houston feels no compulsion to hide until she becomes a star.

She’s discovered by the legendary Clive Davis at Sweetwater’s, a New York nightclub where her protective and domineering mother, Cissy Houston, is the headliner. Whitney, still coltishly unseasoned, steps out on stage and sings “The Greatest Love of All” and it’s the first of many performance scenes that will give you chills. Here, and in Whitney’s debut appearance two weeks later on “The Merv Griffin Show,” and in the extravagant way that she takes command in her videos and concert appearances, “I Wanna Dance With Somebody” channels the soaring gospel-meets-pop-meets-her-own-joyful-thing majesty that made Houston, arguably, the greatest female popular singer after the holy triumvirate of Aretha, Barbra, and Judy. What you hear in Houston’s voice is indescribably infectious, but it’s really the sound of faith.

She is more or less forced, by the music industry and by her manipulative business-manager father, to hide her relationship with Robyn. She complies, though in a complex way, shunting Robyn to the side and sleeping with men, like Jermaine Jackson, whom she’s attracted to, all of which feeds her without fulfilling her. She keeps Robyn hanging around, as her creative director and closest comrade, but Whitney also has a conflicted traditional side. She says she longs for a husband. Was Robyn Whitney Houston’s greatest love of all? The film answers that by dramatizing how the love that a homophobic society coerces Houston into repressing is at the heart of the traumas that come for her later. She denies who she is and keeps trying, and failing, to fill the void.

It doesn’t help that a segment of her audience turns on her for making pop music that’s “not Black enough.” Whitney herself, commiserating with Robyn, ruefully mocks the image she has to project in the “How Will I Know” video: flip, bouncy, and flirtatious, with a wig of taffy curls and the wholesome grin of what she derisively calls “America’s sweetheart.” That wasn’t her; her personality was grittier, wilder, tougher and she felt alienated from the princess-next-door image she was selling.

The music, however, was another story. The movie shows us how Whitney meticulously chose among the songs Clive Davis found for her and how her taste was broader than traditional R&B because she’d grown up in a far more eclectic world. The songs reflected her spirit – and besides, it’s a form of elitism to believe that a pop song as luminous as “So Emotional” or “Didn’t We Almost Have It All” somehow lacks the “purity” of rock ‘n’ roll or R&B.

We see Whitney getting booed at the 1988 Soul Train Music Awards, and the film says it’s no coincidence that that’s the night she meets Bobby Brown, the sexy scurrilous lightweight she hitches herself to like a jalopy to hell. Ashton Sanders, who gave “Moonlight’s” greatest performance, plays Brown with just the right touch of slit-eyed saturnine opportunism. He and Whitney have a fatal attraction – she gives him respectability, he gives her street cred. And maybe she felt, too much, that she needed that. There’s a moment between them that’s so horrifying it’s funny: Bobby proposes to Whitney in the back of a car, and then, after he pops the bling on her finger, he drops some news he should have told her beforehand. This is who he is. So why did a star of Houston’s power and magnitude embrace this scroundrel as her romantic destiny?

In “I Wanna Dance with Somebody,” the Whitney we see gets dragged down by forces both in and outside of her. She feels comfortable with Bobby; she can let her hair down around him. But she wants a home, and he’s a party monster, slippery and untrustworthy, a quality that echoes Whitney’s dealings with her father, who treats her as “daddy’s girl” but also as a cash cow he can exploit. The way she gets ripped off contributes to her stressed-out downfall.

The movie could have pushed the darkness a notch further, as Whitney spins down in a vicious cycle of splintered ego and self-destruction. “I Wanna Dance with Somebody” is frank enough about her cocaine addiction, but her dissolute final days are staged rather demurely. Yet through it all, we feel the terrible way that she’s pulled in all directions – a tricky thing for a biopic to dramatise and this one does it thrillingly well. Kasi Lemmons’ staging has an unfussy intimacy, and she pulls off a coup by ending the film with one of Whitney’s greatest performances, though one that’s not nearly as famous as her “Star-Spangled Banner” at the 1991 Super Bowl. It’s her live performance of the medley of “I Loves You, Porgy,” “And I Am Telling You I’m Not Going” and the supremely devotional “I Have Nothing” from the 1994 American Music Awards, which builds and builds until her voice shines like a heavenly beacon. It lights the audience up.