‘Puss in Boots — The Last Wish’ is perfectly fun

* The good news is that the character is evergreen 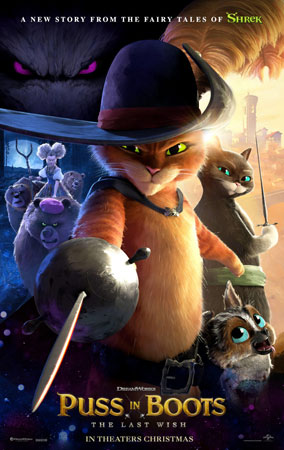 Quick, without looking, guess how long it’s been since there’s been a Shrek movie or even a Shrek-adjacent one. Over a decade seems too long for such a popular franchise, right? And yet here we are, 11 years later, welcoming back Antonio Banderas’s swashbuckling feline in ‘Puss in Boots: The Last Wish,” which opened in theatres on Wednesday.

No wonder he’s forced to think about his own mortality in this one – certain segments of the audience will be too when they realise how much time has passed. It wasn’t for lack of trying, but things were happening behind the scenes with various directors coming and going. then Universal acquired DreamWorks and they went back to the drawing board under new leadership. Somehow television spinoffs kept coming.

The good news is that the character is evergreen. And as soon as Banderas starts speaking, and singing, as his playfully egotistic character, it’ll feel like hardly any time has gone by at all. In “The Last Wish,” the ever-confident Puss in Boots is shaken to discover that he’s used up eight of his nine lives and, for the first time, has started worrying about his own death.

It might seem a little dour for a children’s animated comedy, but when you start to think about other kids’ movies, it’s actually a quite common theme. Are they the anxieties of the middle-aged creators creeping out or an empathy machine for kids to think about the adults in their lives? Both? Does it matter? It’s a device to rattle our hero, who has a bounty on his head and a big, bad wolf on his tail. First he tries out retirement life in a home with Mama Luna, in which he’s forced to behave like a cat – using a litter box and eating cat food as opposed to his stovetop cooking as a cover of The Doors’ “The End” plays in the background. But he gets a lifeline in the legend of a single wish in a star that’s fallen to earth and is waiting to be granted, sending him, Kitty Softpaws and a gratingly earnest dog on an adventure to get said wish.

This is where the movie really finds its groove, with the introduction of Goldilocks who is a kind of crime lord to her family of bears, Mama, Papa and Baby and, separately, a no longer little Little Jack Horner who are all after the wishing star too.

The vocal cast is an embarrassment of riches, especially Pugh, Colman, Winstone, who are right out of a PG-rated Guy Ritchie movie and should get their own spinoff. Mulaney, too, is a perfect adult brat, bitter about his origin being just a nursery rhyme and not a full fairy tale. He’s another kind of crime brute, collecting and stealing famous fairy tale items to compensate for his own lack of magical powers and uses them to fun ends.

Directed by Joel Crawford, with Januel Mercardo as co-director, “Puss in Boots: The Last Wish” has enough good jokes to keep anyone amused for an afternoon at the movies. The animation is exactly what you need it to be too and avoids too much of the frenetic anarchy of a lot of kids’ movies that mistake chaos for excitement. Ultimately, it doesn’t matter how much time has lapsed, Banderas is welcome back as the “leche-whisperer” whenever he wants. “Puss in Boots: The Last Wish,” a Universal Pictures released in theatres on Wednesday, is rated PG by the Motion Picture Association for “rude humour, language, action/violence and some scary moments.” Running time: 102 minutes. Three stars out of four.