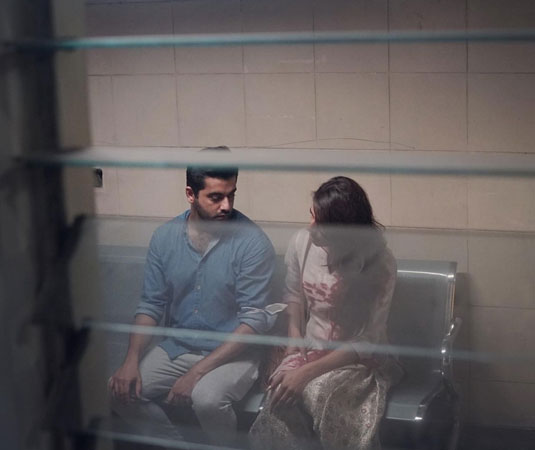 Even after several attempts of shunning the masterpiece, the unlikely love story made it to the local cinemas and saw an astounding response.

Saim Sadiq’s directorial, Joyland, has managed to ruffle some feathers.

The film starring a trans actor in the lead role has garnered praise from all over the world. However, the film faced a possible ban just days before its release in its home country.

Even after several attempts of shunning the masterpiece, the unlikely love story made it to the local cinemas and saw an astounding response.

One of the haunting moments that stayed with the audience was Alina Khan’s introductory scene in the film; Biba covered in blood as she walked numbingly toward Ali Junejo’s Haider. Now, in a note, Saim has revealed that the scene was inspired by a similar real-life incident that had once occurred with Alina.

Alina, who had previously worked with Saim in his other offering, Darling, celebrates her birthday on Dec 20.

Taking to Instagram, the filmmaker shares never seen before pictures with his lead actor where the two could be seen in an intense exchange while shooting the aforementioned Joyland sequence.

Recalling the incident, Saim penned, “A day before the shoot for Darling, Alina disappeared for hours. Sana Jafri and I texted her to bring this particular pair of shoes with her that she had to wear for her first scene. The first scene this magnificently talented girl would ever shoot in her life. But Alina just wouldn’t answer anyone’s call.”

He revealed, “No one could trace her until 12 am at night when she finally called me from an unknown number.”

Saim said that he could “tell that she was trembling when she said she was stuck in ‘a situation’ and just ran away from it and now needs a place to stay the night. I told her to come over.”

She finally reached his place at 2 in the morning. “She had bruises on her neck from the assault that she had managed to run away from. Yet, all she cared about was that she makes it to set on time and not lose this opportunity. And in that escape, she lost her phone and handbag,” Saim narrated Alina’s ordeal.

“All she managed to bring with her were the shoes and she kept assuring herself and me that everything was still fine because she had her shoes for her first scene. I gave her an ointment, she slept in my sister’s room and the next morning we started the shoot, cracking jokes and being chill as if nothing had happened,” he continued.

Saim added, “Years later, we shot for her introductory scene as Biba in the movie Joyland and had the most cathartic experience of our lives. Both of us found a quiet room to discuss what we normally only joke about: the casualness with which we have to process the violence around us.”

He added how the duo cried and “got the tears out of our systems because we didn’t want Biba to cry in the scene.” Saim wrote, “She was going to show up with blood on her shirt and there was going to be no explanation as to where it came from.

Because the everyday violence around us never ever makes sense. We hugged and cried again after pack up because we knew… this was our scene.”

Saim concluded his note while lauding Alina. “It’s hard for me to think of a person who is more unaware of their inspirational status in other people’s lives than Alina! You are a true heroine of our times! Happy Birthday, Alina Khan! Thank you for your talent, your spirit, and your magical artistry! You were born to be a movie star!” he said.

The film paints an apt picture of the shunning trans community faces daily in the country. Joyland is Pakistan’s official submission to Oscars 2023 and shortly after that was announced in late September, Pakistani activist and Nobel Laureate Malala Yousafzai joined the film as an executive producer.