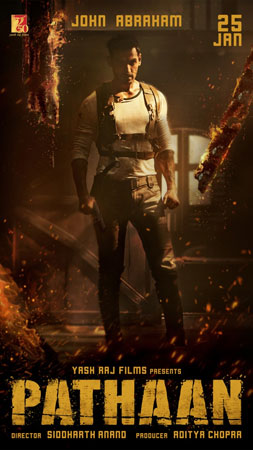 Year 2022 has been a game changer for the Bollywood film industry with some blockbuster films like Brahmastra, Drishyam 2, Gangubai Kathiwadi and RRR.

The next year is going to be even better as it is going to witness the release of some big budgeted films consisting of the A-lister actors of the Hindi cinema. Here is a list of the films that will set the box office on fire in the year 2023:

‘PATHAAN’ — Shahrukh Khan AKA the King of Bollywood will be making his comeback after four years on the big screen with film Pathaan. The film also stars Deepika Padukone and John Abraham in the lead roles. Pathaan is directed by Siddharth Aanand and backed by Yash Raj Films. The spy-thriller is set to release on January 25.

‘KISI KA BHAI KISI KI JAAN’ — the action-packed film starring Salman Khan, Pooja Hedge and Venkatesh in the lead roles is slated to release on Eid 2023. Khan looks extremely dapper in the film with long hair. The film is directed by Farhad Samji.

‘JAWAN’ — SRK has another film coming up in 2023 by the name Jawan which is going to mark his first collaboration with director Atlee. Vijay Sethupathi will be playing the antagonist in the film. Atlee’s film features Nayanthara in the female lead. The entertainer film Jawan will be released on June 2 in multiple languages like: Hindi, Tamil, Malayalam, Telugu and Kannada.

‘DUNKI’ — it looks like year 2023 is going to be great one for Shah Rukh Khan as he has three films coming up in 2023. Dunki is Khan’s third film that is going to be released next year. SRK will be collaborating with one of the popular directors of the Bollywood industry Rajkumar Hirani for the first time. Tapsee Pannu will be playing the lead actress in the Hirani’s directorial film.

‘TIGER 3’ — Salman Khan’s hit franchise Tiger will have another installment next year featuring Khan alongside Katrina Kaif. The action-entertainer is backed by Yash Raj Films and is slated to release Diwali 2023, reports IndiaToday.