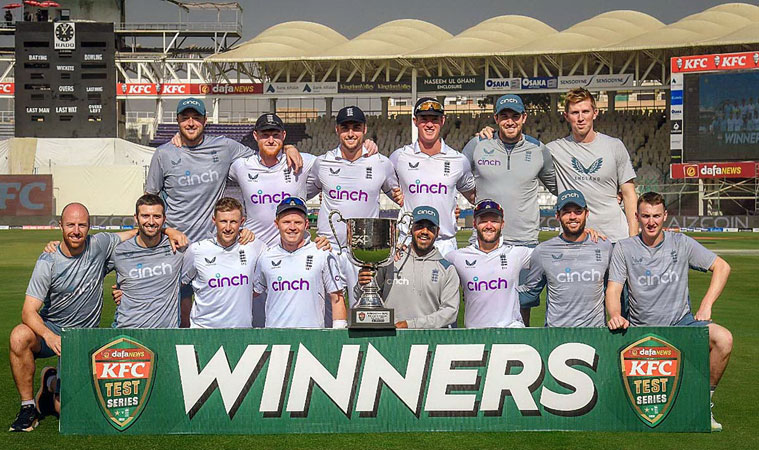 KARACHI: England beat Pakistan by eight wickets in the third and final Test in Karachi on Tuesday to sweep the series 3-0 and hand Pakistan their first home whitewash.

Resuming on 112 for two, England reached the modest 167-run target in just 38 minutes, with Ben Duckett and Ben Stokes finishing unbeaten on 82 and 35, respectively.

England won the first Test in Rawalpindi by 74 runs and the second in Multan by 26 runs.

This was England’s first Test tour of Pakistan since 2005, having refused to tour the South Asian country in the years since because of security concerns.

Duckett cracked his 12th boundary off fast bowler Mohammad Wasim to seal the victory on the fourth day, with England finishing on 170 for two.

Salman Ali Agha dropped Stokes off spinner Abrar Ahmed with the England captain on 22 and just 19 needed for victory.

With nine wins in their last 10 matches, England have vindicated their newly adopted freewheeling approach to Test cricket dubbed “Bazball”, after the nickname of coach Brendon McCullum.

McCullum and Stokes took charge of a misfiring side in May that had won just one of their previous 17 Tests, including a 4-0 humiliation in the Ashes in Australia. England played power-packed cricket right from the start of the Pakistan tour, smashing 506 for four to set a record for the most team runs on the opening day of a Test.

Stokes was also bold in his captaincy, setting a tantalizing 343-run target for Pakistan in Rawalpindi and then setting unusual fields to get wickets.

“It’s perfect,” said Stokes of the 3-0 result. “We’ve got a process we want to play but the challenge was the different pitches for every Test.”

Although the batters shone on Pakistan’s run-friendly wickets, he also had praise for his bowlers. “We were particularly good with the ball. Whoever I threw it to, they seemed to deliver. The commitment and mindset has been top-drawer,” he said.

Player-of-the-series Harry Brook, who accumulated 468 runs with three hundreds, was also singled out by Stokes.

“Every person has stood up at some point, but Brook has been unbelievable. He’s set Pakistan team on fire… the calmness and belief is high class.”

Disconsolate Pakistan skipper Babar Azam said his side were only “good in patches”.

“Definitely, it’s a big disappointment. We are not good enough to fight back,” he said.

Pakistan’s problems were compounded by injuries to their fast bowlers, with Shaheen Shah Afridi ruled out before the series with a knee injury.

Haris Rauf and Naseem Shah missed the last two Tests with fitness problems. But Pakistan suffered major batting collapses, losing their last six wickets for 108 in the first innings in Karachi and seven for 52 in the second.

Tuesday’s defeat means it is also the first time Pakistan have lost four home Tests on the trot, having been beaten by Australia in Lahore in March.