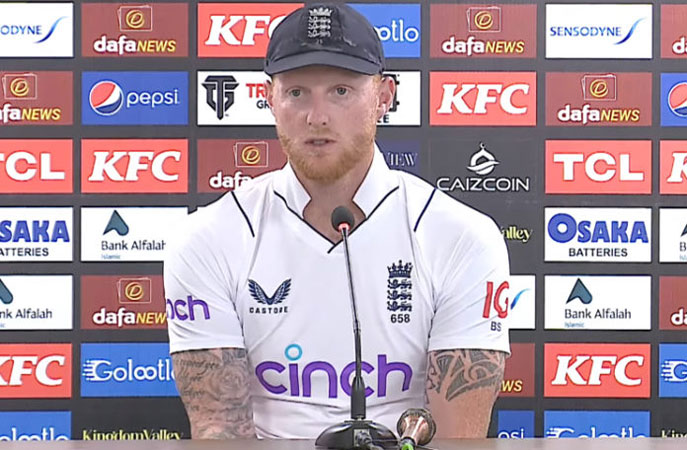 KARACHI: England captain Ben Stokes has affirmed that his team will continue with their attacking style of playing Test cricket, saying if he can make people ‘stop saying that the Test is a dying format’, he will keep doing that.

After his side’s comprehensive win in the final Test that completed a 3-0 clean sweep for England against Pakistan, Stokes said it was always challenging to play in subcontinent conditions but what they had done was ‘pretty special’.

“I feel like as if everything we’ve tried has come off in the series,” he said in a post-match press conference on Tuesday.

He claimed that he had learned a lot from playing in such conditions, saying it was one of the best things for him on the tour. Stokes, who has now led England to nine victories out of ten matches since he took over the reins of the Test side earlier this year, vowed to continue with their aggressive approach in red-ball format, often dubbed as ‘BazBall’. ” Sports is entertainment…People want to see the exciting stuff,” he said.

“What we can do is to concentrate on the way we want to play and if we can make it (Test cricket) grow and stop people saying it’s a dying format, we’ll keep doing that.” “But I am not gonna say every nation around the world needs to change the way they play because I don’t think it’s not my place to say.”

Furthermore, England’s captain praised the 18-year-old Rehan Ahmed, who returned astounding figures of 5/48 in the second innings of his debut Test, for having a ‘cricket savvy brain’ and called him an ‘unfinished article’. “We won’t be putting any more pressure on him and let him continue to get better and better,” he said about Rehan – the youngest player to make a Test debut for England. “He is not a finished article but it’s a great sign for us going forward to have someone at such a young age, whom we can put a lot of time and effort into him” he maintained.