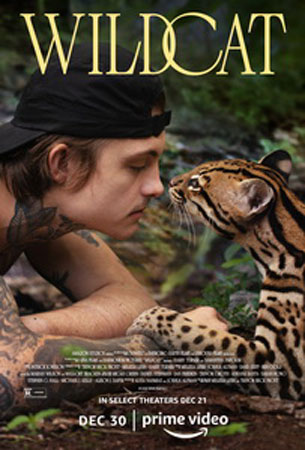 On paper, this wildlife documentary looks like a slushy sentimental tale of healing and growth. It follows young veteran Harry Turner, who joined the army at 18 and was discharged with PTSD and severe depression after serving in Afghanistan. In the Peruvian Amazon, he finds new meaning in life by caring for an orphaned baby ocelot. Actually, Wildcat does turn out to be a story of healing and growth. But it’s genuinely heartfelt, made with incredible sensitivity and emotional intelligence by Melissa Lesh and Trevor Frost. It starts with Turner volunteering at a wildlife rescue centre in the Peruvian rainforest run by an amazing American PhD student called Samantha Zwicker. She explains that Harry’s experience of harsh environments makes him suited to the rainforest; most researchers can’t hack it. The two of them soon become a romantic couple. Then an ocelot cub arrives at the centre, found in a tree felled by loggers. The pair call him Keanu and make a plan for Harry to raise the cub to be released into the wild in 18 months.