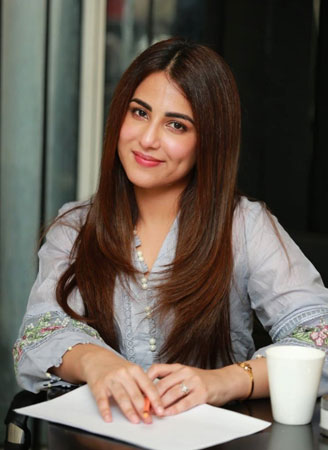 Ushna Shah is a well-known actress in the entertainment industry who is renowned for her outspoken and direct demeanour. Ushna Shah has gained notoriety for speaking out on a variety of social concerns, such as animal welfare and gender-based violence. She has also instructed men on how to respect women’s boundaries. Ushna Shah recently tweeted about online haters. Online trolls frequently mock Pakistani celebrities for their lifestyle decisions. Pakistani public has a tendency to point out inconsistencies in their appearance, gestures, comments, and associates. Ushna Shah is one example who deals with these “keyboard warriors” on a daily basis on social media.

Ushna on the other hand is a diva you don’t want to cross! The Habs actress urged “keyboard warriors” to go online using their real names rather than tacky handles like “cutiepie2334”.

Tweeted the outspoken actress, “Here is a challenge for internet trolls: reveal your identity. “Ghatiya bhegharait ku*iya mar jaa tu” by user* “cutiepie2334″ sounds so much better if it’s coming from Shazia Sheikh, 42, mother of 4? Her neighbors & kitty party ought to see how Shazia Baji truly feels & speaks.”

The 31-year-old is Isra Ghazal’s sister and the daughter of the actress Ismat Tahira. She has established herself as an accomplished actress by playing leading roles in well-known drama serials such as Bashar Momin, Bala, Cheekh, Parizaad and Alif Allah Aur Insaan. Shah is creating a stir in the world of work because of her consecutively successful performances in recent serials. She has performed admirably in every one of her roles, from Parizaad to Habs.